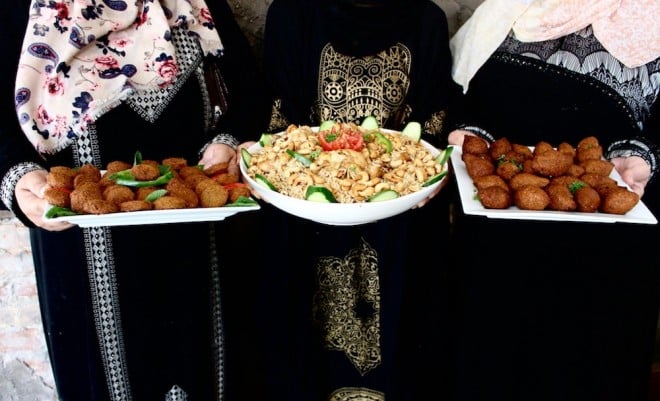 Three Syrian women who arrived in Canada via a Jordanian refugee camp this past spring will soon debut a community-funded catering company that serves authentic Syrian food.

The idea for the business came about at a welcome dinner held at the Eucharist Church in Hamilton for recently arrived Syrian refugees. But instead of being fed, the guests insisted on doing the cooking. That was the beginning of an inspiring new catering company called Karam Kitchen, supported by Kickstarter crowd funding and fueled by good food.

Hamilton resident Brittani Farrington volunteered at the welcome dinner where she met newcomers Rawa’a Aloliwi, Dalal Al Zoubi and Manahel Al Shareef. After presenting the delicious Syrian food, the women asked Farrington — with the help of Google Translate — how they might be able to sell their food in their new community. Farrington was immediately inspired to help. “I never expected to be starting a business,” she says, “it just came naturally, out of a desire to see my Syrian friends find meaningful work in Canada.”

Farrington has experience in marketing for catering companies, and her business partner Kim Kralt has a degree in social work and a background in food services. Together they’re helping the Syrian women turn by-heart recipes for authentic tabouleh, hummus, mutabal (a yogurty eggplant dip) and more into what Saveur Magazine recently deemed “Canada’s hottest new catering company.”

Earlier this summer, Aloliwi, Al Zoubi and Al Shareef attained their food handling certification and put their recipes to paper. In July, Farrington set up a Kickstarter campaign with a goal of raising $6,500 over 30 days to get the fledgling business started. It took only four. She then set a new goal of $15,000 and recently exceeded it once again. Funds generated will go toward cooking tools, licensing, marketing and an Arabic translator.

Karam means generosity in Arabic, and the name is a true reflection of the business philosophy. The first official gig takes place on September 8 at a meeting of The Mayor’s Advisory Committee on Syrian Newcomers, but the women are already looking to the future and how to help other refugees. “Like any business, we hope to grow,” Farrington says, and the company is already exploring the possibility of an expansion into the prepared-meals market. “We hope to grow sustainably to the point where we can hire more newcomers, to create more opportunities for them in their new country.”

More:
The Olympic highs and lows that defined the 2016 games for women
The best parts of Any Schumer’s memoir aren’t funny
Bardish Chagger is Canada’s first woman House Leader