Starbucks Canada has entered the Beyond Meat game with a breakfast sandwich of its own. Topped with cheddar cheese and egg on what Starbucks calls an “artisanal bun” (more on that later), the plant-based patty is spiced with oregano, basil, rosemary, and fennel—and it’s a total banger.

Chatelaine had the chance to try a few of Starbucks’ Beyond Meat, Cheddar and Egg sandwiches, along with a couple of newly launched coffee drinks. The verdict? The team found this version of the Beyond Meat patty juicier than some of the other meatless patties available, and certainly one of the better vegetarian breakfast sandwiches on the market right now. Some staffers could detect a soy-ish, slightly bitter aftertaste, but it’s significantly less noticeable than competing sandwiches (and nothing that a dash of hot sauce can’t fix). The (real) cheese tastes like cheese and the (real) egg tastes like egg, which is a nice surprise when you’ve come to expect gummy or puck-like fast food versions. As a meat-eater who typically can’t enjoy popular breakfast sandwiches due to religious dietary restrictions (they’re usually pork), this is a nice alternative I’d probably treat myself to.

The thin and toasty English-muffin-style bun was the one point of contention. Most liked it fine, though one editor compared it to A&W’s version, whose softer bun they preferred. 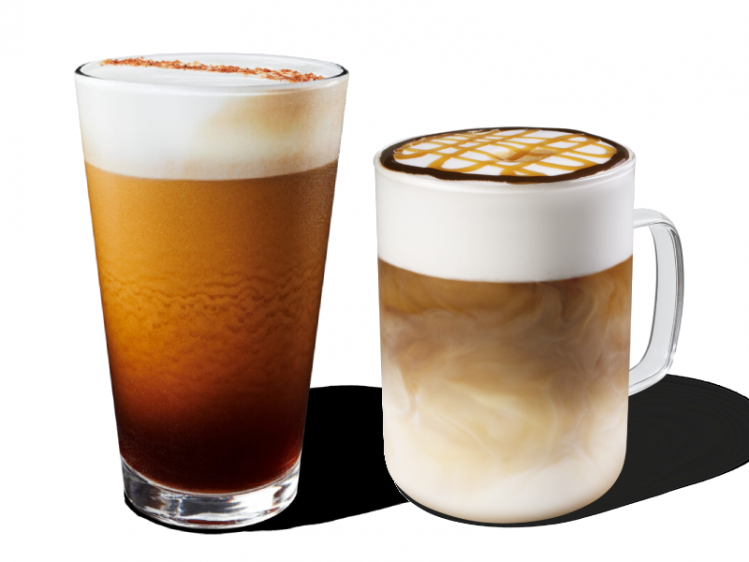 Starbucks Canada also released two new drinks with this sandwich drop. Its first offering, the Nitro Cold Brew With Salted Honey Cold Foam, is a nitrogen-infused cold coffee with a sweet-and-salty swipe of honey foam. If you like your coffee strong, mostly black, with a little lingering sweetness, you’ll probably enjoy this. We didn’t love the cold foam that topped it off, though: the honey flavour was a bit odd and it was difficult to mix. The nitro brew would’ve been just fine on its own. The Cocoa Cloud Macchiato, though, was a hit. Espresso, fluffy foam, toffee nut syrup and a mocha drizzle swirl combine for a great dessert-like drink. For anyone with a strong sweet tooth, this is a real treat.