The Ultimate Way To Eat Potato Latkes (You're Welcome)

We present the most delicious way to eat latkes for Hanukkah 2017 — and maybe forever. 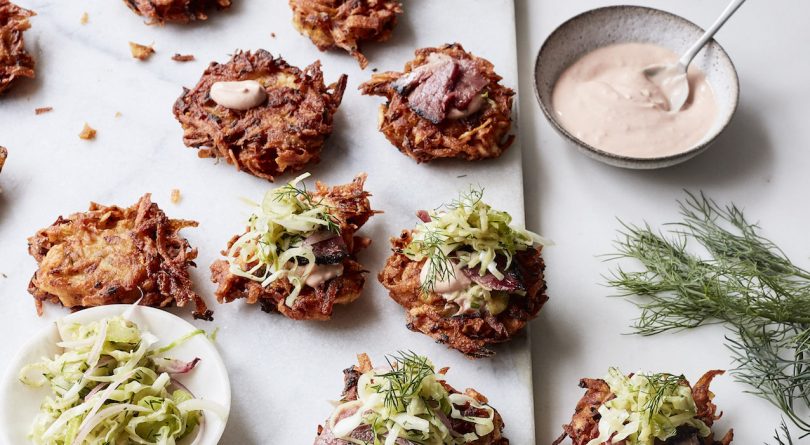 Fire up your frying pan and bust out your menorah because Hanukkah is officially here. That means it’s all about latkes — and sufganiyot, or jelly doughnuts — for the next eight nights.

Latkes are most commonly eaten with sour cream or apple sauce (the ideal latke condiment for myriad reasons). But if you’re tired of the tried-and-true combinations, we present latke Reubens — or the ultimate way to eat latkes for Hanukkah 2017.

Top Chef judge Gail Simmons created this indulgent Frankenstein dish, which fuses together the flavours of Hanukkah and the classic deli sandwich featuring Thousand Island dressing, sauerkraut and a pile of pastrami. Simmons first made latke Reubens for her 2014 television show The Feed; thankfully, she’s delivering her recipe to the masses in her new cookbook Bringing It Home.

I attempted her recipe a few days before Hanukkah. While Simmons provides her family latke recipe in her book, I deviated and made my grandmother’s because sometimes, you don’t mess with tradition (and you can make Reubens with any latke recipe). 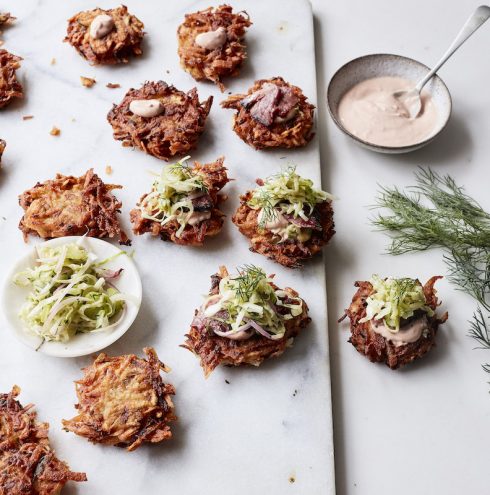 Like Simmons, I used a food processor (make sure to use the shredder attachment) to grate the latkes and onions. However, instead of mixing in flour as a binding agent, I poured in Corn Flake crumbs — my mom and grandmother always reached for them because they add both flavour and texture to these fried potato patties.

To top my latkes, I made Simmons’ Thousand Island-inspired dressing —  with ketchup, hot sauce, horseradish and a seasonal sour cream base — as well as a tart cabbage-and-Granny-Smith-apple coleslaw. (Simmons decided to use slaw instead of sauerkraut because she says it provides some much-needed lightness to this super heavy dish.)

Since I wasn’t serving my mini Reubens to guests, my partner and I assembled them while watching The Office on Netflix. Each crispy latke got a schmear of creamy dressing, a slice of savoury pastrami and a forkful of tangy slaw. Let’s just say we might have found our new favourite Hanukkah dish.

And don’t feel you need to limit these mini Reubens to the Festival of Lights. They’re a perfect party food — or a Sunday night TV dinner. So move over spaghetti pie, in my kitchen there’s now a new contender for the ultimate comfort feast.