Should we be worried about eating Frankenfish? 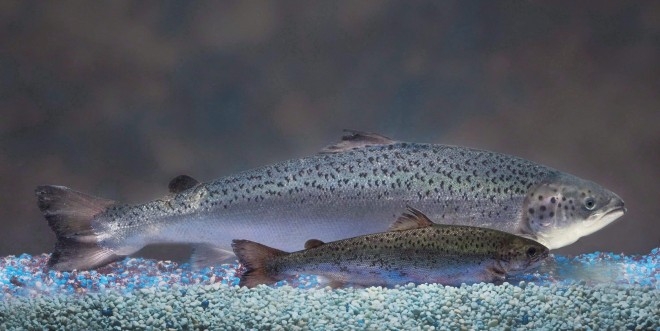 The salmon is “as safe and nutritious for humans and livestock as conventional salmon,” according to Health Canada and the CFIA, but that doesn’t appear to appease environmental groups and advocates; calls for mandatory labelling and retailer boycotts are already emerging.

What is GMO salmon?
It’s salmon that’s designed to grow faster and reach market size more quickly. Designed by AquaBounty Technologies Inc., a biotechnology company based in Massachusetts (with offices in PEI), the salmon is a result of the introduction of a growth-hormone-regulating gene from Chinook salmon to the DNA of an Atlantic salmon, allowing it to grow to full size in only 16 to 18 months instead of three years.

Will it be labeled in stores?
Probably not. Health Canada only requires labelling where “there are clear, scientifically established health risks or significant changes to the nutritional qualities of the food.” And besides, we can’t count on food labels to provide the whole story; organic labels, for example, aren’t strictly regulated, and they don’t guarantee that the food is pesticide-free.

Related: Meet the scientist debunking every dumb food myth on the internet

Should I be worried?
Not really. There’s no scientific evidence to support the idea that GM foods pose more risks than conventional food. But rampant public skepticism muddies the water; the opinion gap between scientists and the public on whether GMOs are safe to eat is huge. A study in the U.S.A. by the Pew Research Association showed only 37 per cent of the public feels GM foods are safe, compared to 88 per cent of scientists (from the American Association of the Advancement of Science). That’s a 51-percentage point difference.

So, if scientists say it’s safe, why the intense opposition? Environmental groups like the Ecology Action Center cite concerns over the “threat to the future of wild Atlantic salmon”, while Lucy Sharratt of The Canadian Biotechnology Action Network (CBAN), calls into question overall transparency: “Canadians could now be faced with the world’s first GM food animal, approved with no public consultation and no labelling.”

But basic psychology could also be in play. A study by psychologists out of the University of Pennsylvania and University of Toronto argues that staunch GMO opponents may never waver in their opposition. Why? Their research found that these individuals were moral absolutists (believing that particular actions are intrinsically right or wrong), and felt disgusted by the idea of eating genetically modified foods, no matter what the evidence-based arguments may say.

How does it taste?
It may be up to individual preference—some shoppers only buy wild-caught—but one Toronto food writer says, “the flesh is exquisite, buttery, light, juicy—just as Atlantic salmon should be.”

More:
Is it time to break up with sugar?
IKEA’s new, eco-friendly line is here — and it’s gorgeous
Is your Fitbit lying to you?