We've got you covered from savoury road trip snacks to foodie faves. 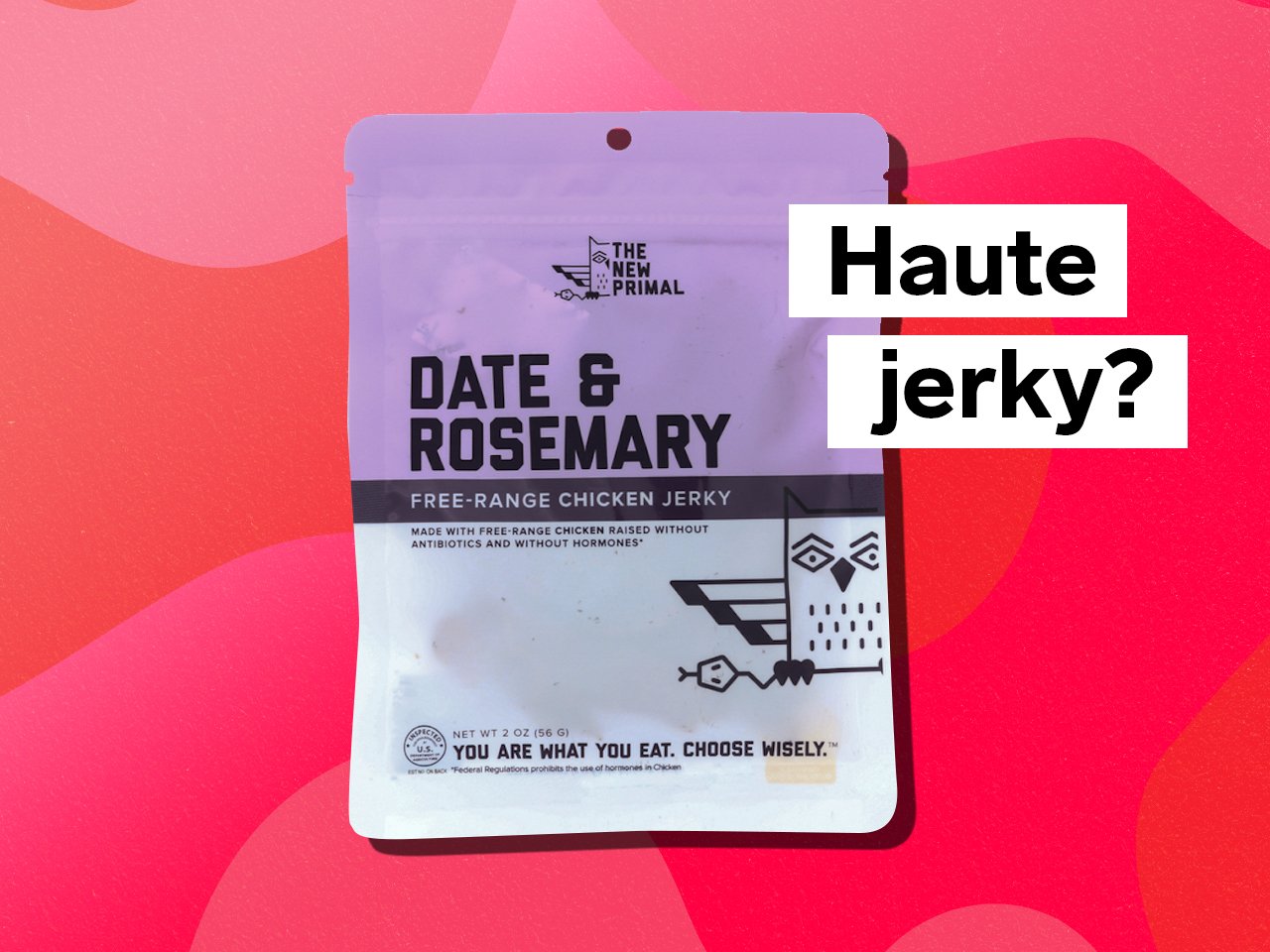 Beef jerky has come a long way in the span of just a few short years. It was once thought of as a  lockjaw-inducing, cow-hide-tough snack fit for grizzled truckers and hangry road trippers. These days small batch, artisanal jerky has become pervasive across Canada.

A trip to the snack aisle reveals colourful packs of jerky, made from choice cuts of antibiotic-free, grass-fed beef, varying in flavours from simple teriyaki to chili-lime. The erstwhile car trip bites have also been rebranded as high-protein, post-workout snacks, fit for gluten-free diets.

Of course, dried meat products prepared to withstand spoilage are popular throughout the world — from biltong in South Africa, to bakkwa in southeast China. However, jerky, which European colonialists learned from the Quechua people of South America in the 1500s, is something North Americans now consider their own — arguably a major reason the jerky renaissance has taken off so swiftly here.

From the tried and tested, to newly created small batch variations, here are our favourite picks available to Canadians.

Oberto Beef Jerky
Made in the Pacific Northwest since 1918, family business Oberto claims to be crafted from premium cuts of meat and accented with natural smoke. Sold in a variety of flavours, including spicy-and-sweet and peppered, Oberto also makes a teriyaki turkey jerky and a BBQ pork jerky, though our favourite is the original, which is nicely chewy, salty and a bit sweet. 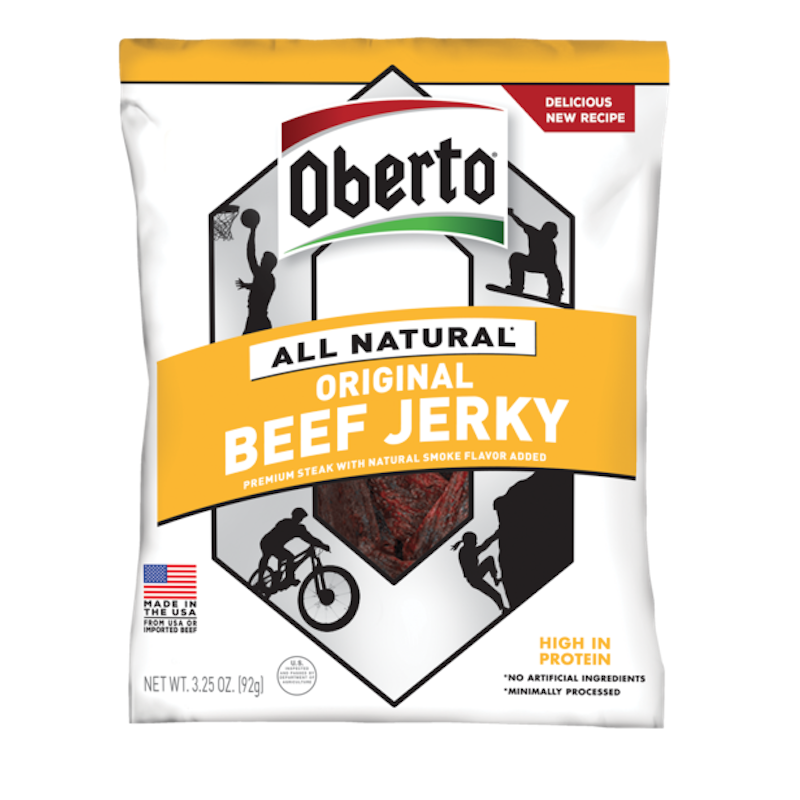 Krave Beef Jerky
Krave may single-handedly be responsible for changing the public image of jerky, hawking their product in nearly a dozen creative flavours (though only five have made their way to Canada so far: sweet chipotle, beef chili lime, sea salt original beef, black cherry barbecue pork and grilled sweet teriyaki pork). All their offerings are well-marinated, exceptionally tender, gluten free and devoid of nitrites, MSG and corn syrup. We like the sweet chipotle, a smoky bite with a subtle hint of sugar, but if honey habanero chicken ever crosses the border, it’s at the top of our to-try list. 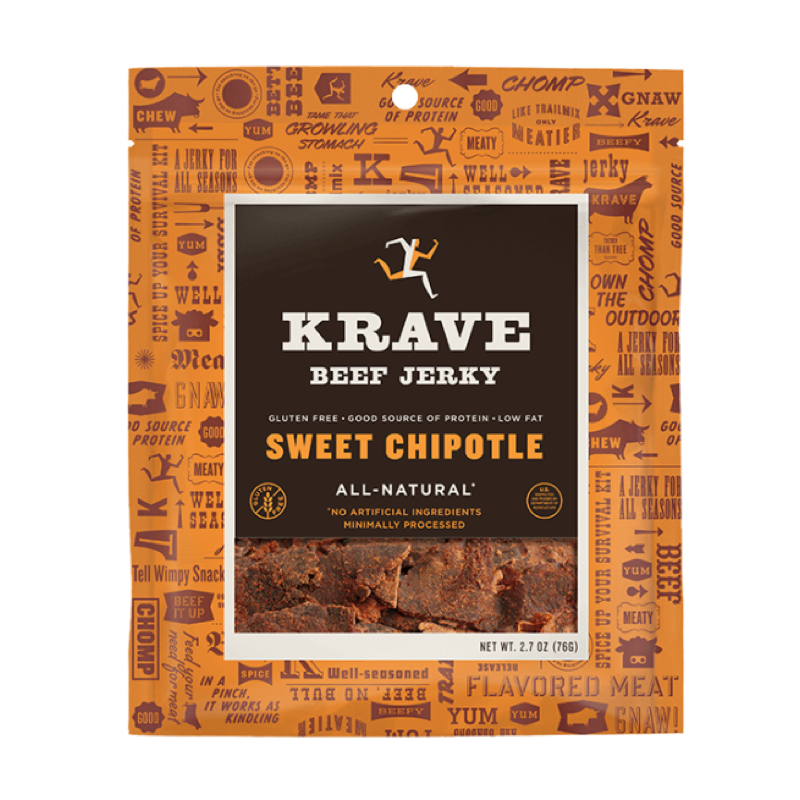 Lorissa’s Kitchen
Along with Krave, Lorissa’s Kitchen is changing public perceptions of mass produced jerky. Their Korean BBQ is made with 100 percent grass-fed beef, their ginger teriyaki comes from chickens raised without antibiotics and their sweet chili pork jerky (our preference) is made from pork raised without growth hormones and has no preservatives or MSG. Their website also features helpful food-and-drink pairings for each flavour (who knew light-bodied, low-tannin reds complemented Korean BBQ jerky?). 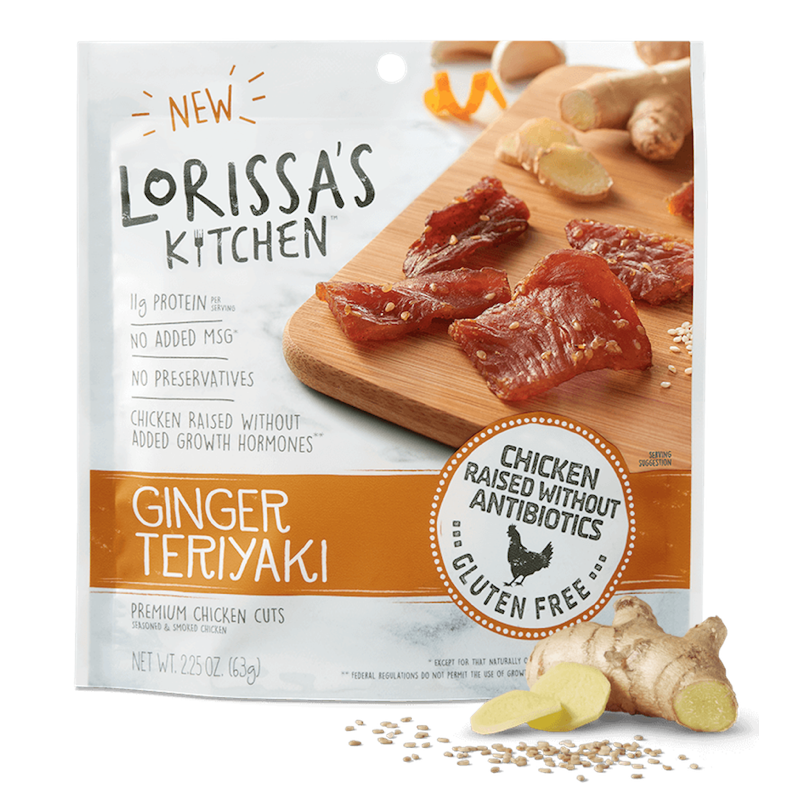 For the patriotic eater

Great Canadian Meat Company
This no-frills Canadian company, founded in Whitby, Ontario in 1992 creates pepperettes, salami and sausages along with their beef jerky (which comes in original, teriyaki, black pepper and jalapeño). We’re partial to the jalapeño flavour, which adds a subtle kick to the salty, chewy snack. 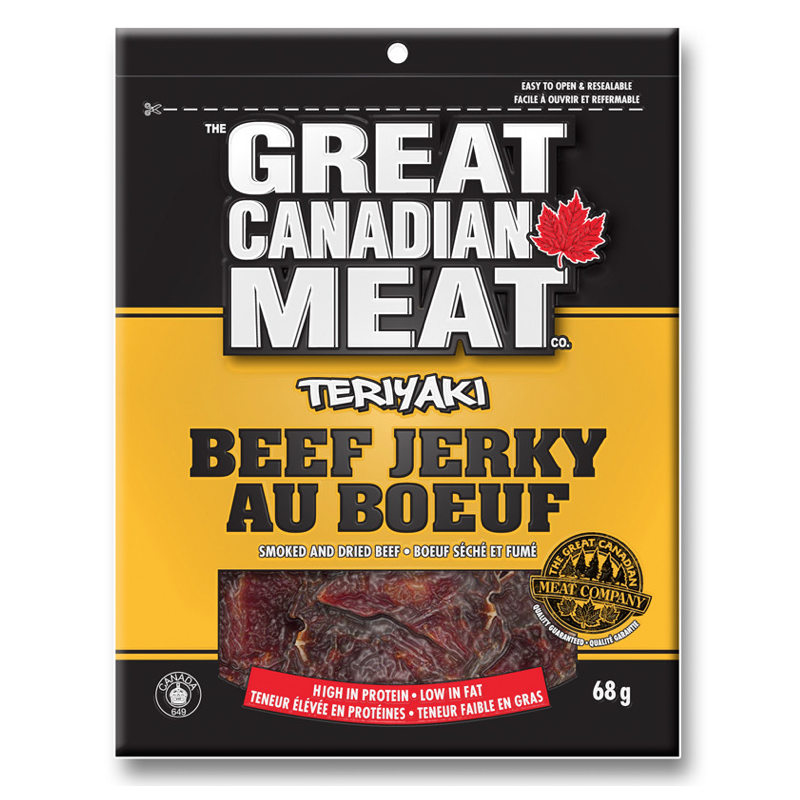 For the exercise fanatic 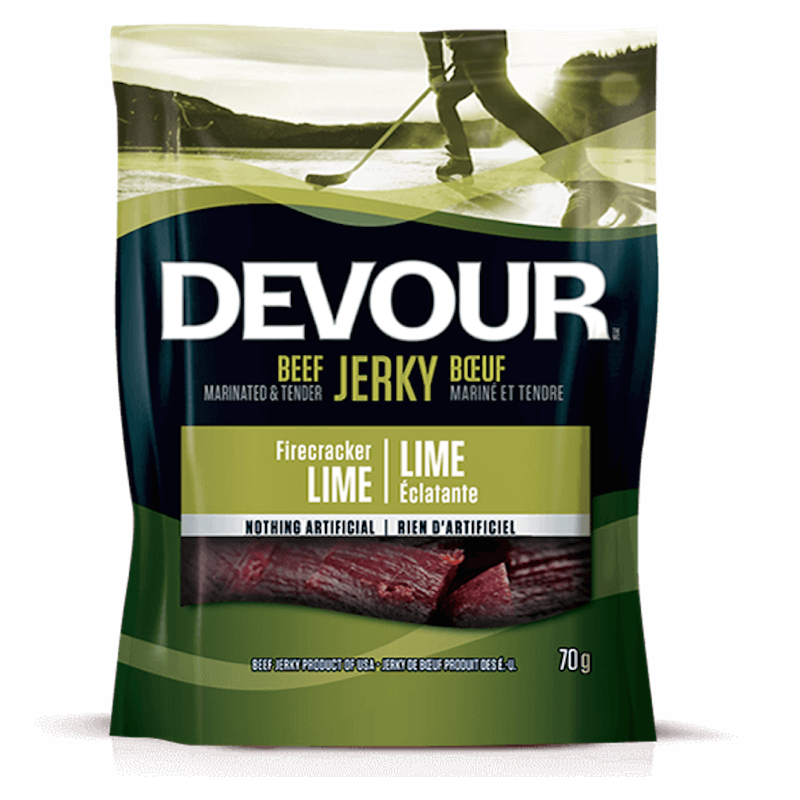 Big John’s Beef Jerky
Probably the most well-loved option amongst jerky aficionados, Big John’s Beef Jerky has been in the business for 30 years, creating handmade, small batch, well-priced jerky that’s smoked over hickory wood chips for 14 hours. We like Big John’s original jerky, which has a smoky, beefy taste and an almost steak-like texture. Spicy, teriyaki and BBQ flavours are also available. 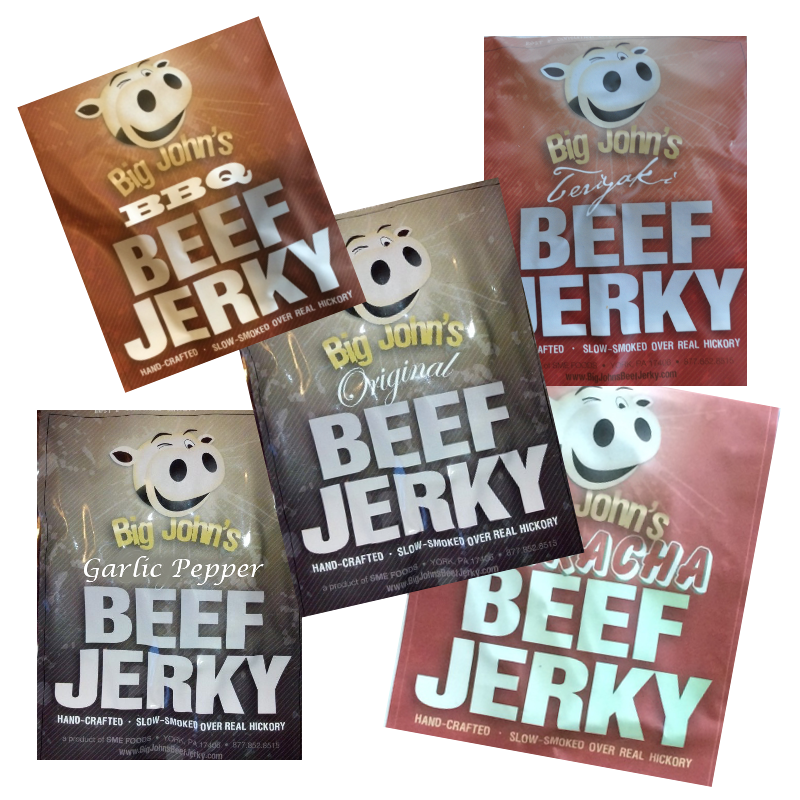 McSweeney’s Premium Jerky
Canada’s most popular homegrown craft jerky, McSweeney’s is available across the country, from 7-Elevens to Couche-Tards. The beef iteration (McSweeney’s also makes pork and turkey jerkys) is marinated in small batches, and smoked using Canadian maple wood. Try the Montreal Steak Spice flavour, which has an undercurrent of complex, peppery notes or the Canadian Maple pork, made with maple syrup from New Brunswick. 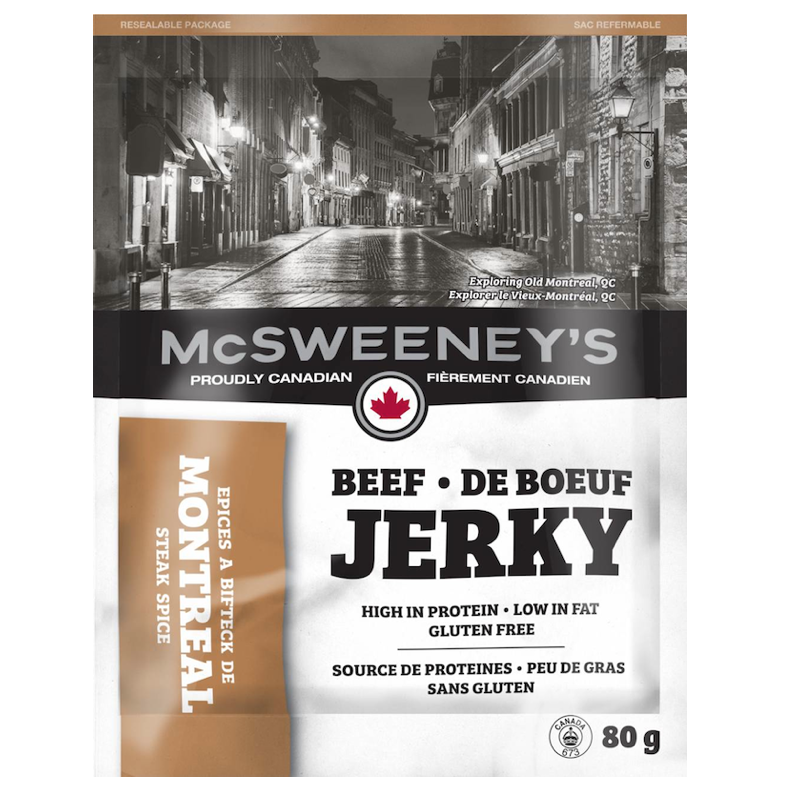 For the conscientious eater

Chops Beef Jerky
When it comes to transparency, Chops has set the benchmark. All beef jerky is made from American Steer brisket, hand crafted and marinated overnight (which adds a subtle flavor that doesn’t overpower the high-quality beef). Centered in the Pacific Northwest, Chops has a moist, tender texture that comes in original, red chili pepper, sweet-and-spicy and teriyaki. 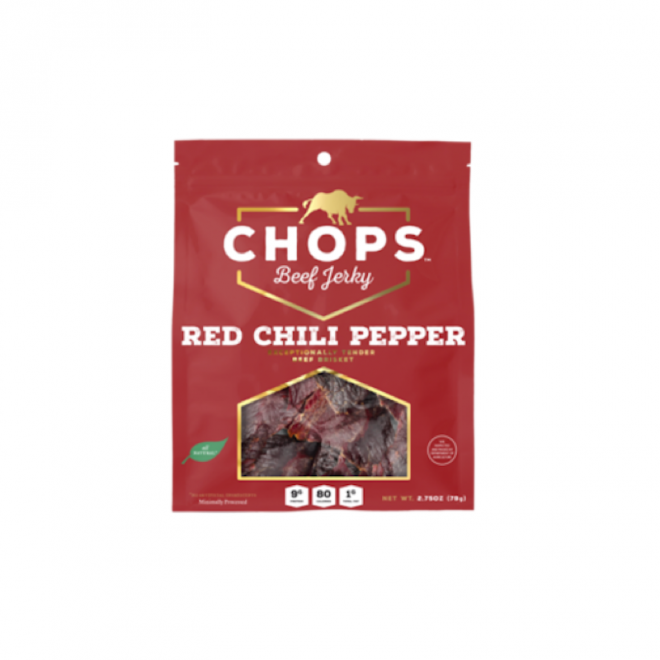 For the environmentalist (and their brood)

The New Primal Beef Jerky
The New Primal prides itself on sustainability, and selecting naturally raised proteins that lack added antibiotics and hormones. The minimally processed snack is also gluten- and soy-free and paleo-friendly. The extensive FAQ section of their website answers all the tough questions and there’s even adorably packaged, kids-sized “snack mates” (essentially, little meat sticks) for the wee ones. 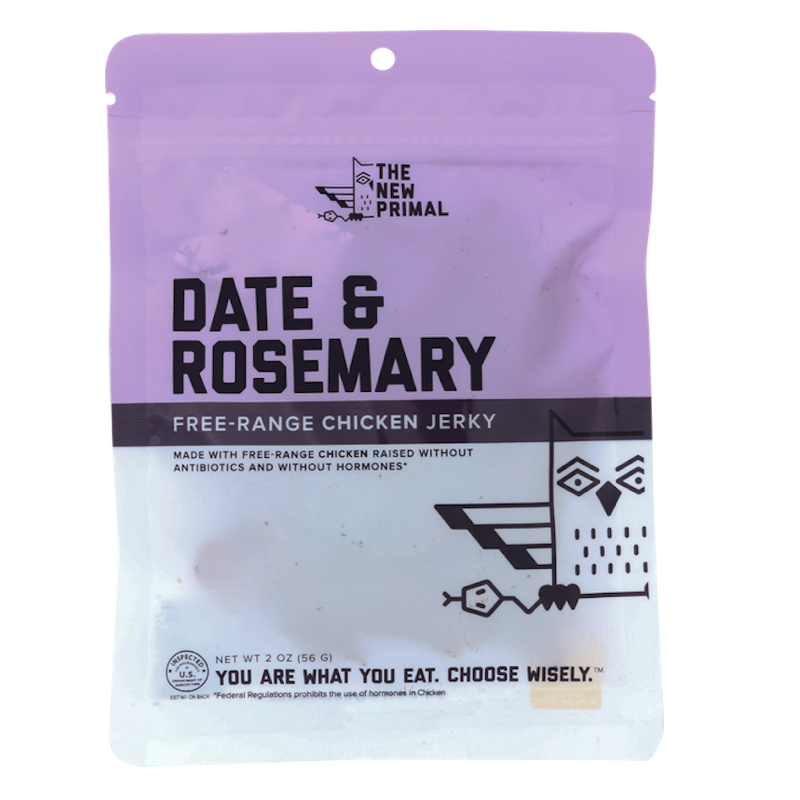 More:
10 ready-to-drink cold brew coffees for a deluxe summer caffeine fix
9 fiery hot sauces we love from around the world — from spicy to @#$%!
The definitive top 10 ranking of things to eat at Ikea