This dark and moody food trend is popping up everywhere 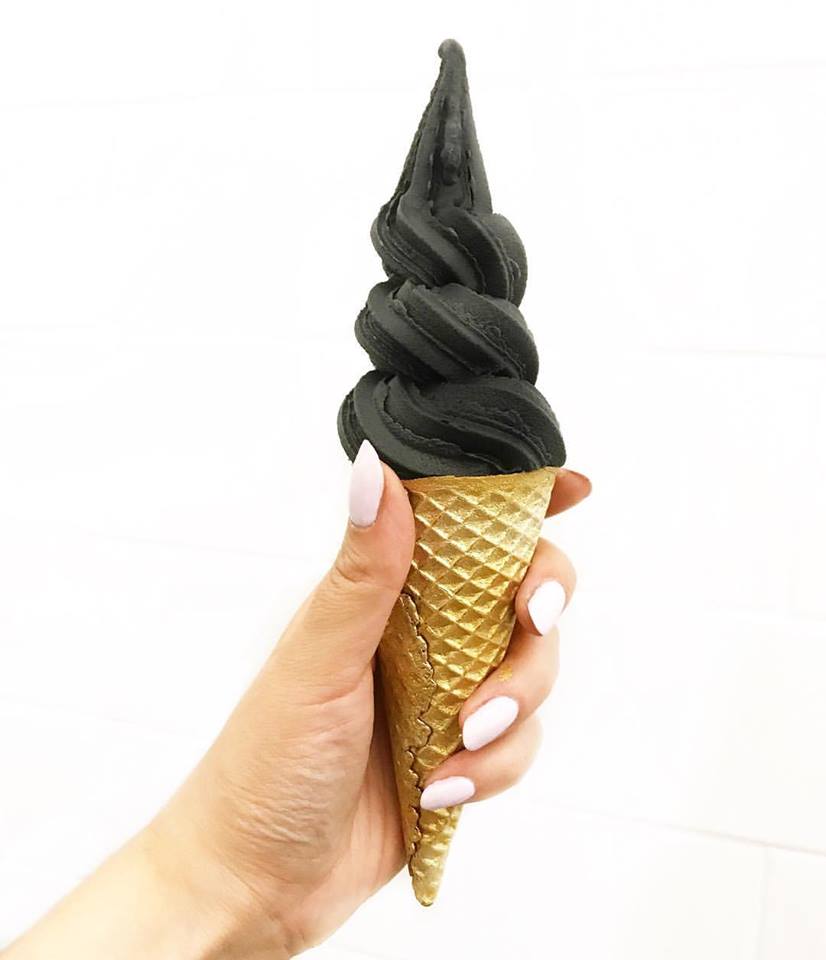 Food trends are fickle, often-unexplainable phenomena. Some, like tacos, Neapolitan-style pizza, and fried chicken, make sense on account of, well, their tastiness. Others, like rainbow foods, sweet potato toast, and extracted chlorophyll, have passed on to the great gastronomic trend graveyard for good reason.

And, while not yet ubiquitous, one food fad popping up on menus in culinary centres worldwide may also be one of the most visually striking. Popularized as much for its purported health benefits as it is for its Instagram-worthy appearance, activated charcoal, seen in the likes of cold-pressed juices, ice cream and even pizza dough, has been blowing up news feeds across social media. Just this past weekend, Toronto crowds lined up in droves outside iHalo Krunch for the uber-trendy, jet black, charcoal ice cream cones (shown above).

Derived from burned coconut shells and various plant by-products, activated charcoal has been used for years in hospital emergency rooms as a stopgap for treating poisonings and overdoses, due to its ability to bind to harmful compounds in the gastro-intestinal tract and filter them out before they can be absorbed in the body.

A few years ago, the pitch-black ingredient started making an appearance in beauty products — in exfoliating masks and makeup removers — much for the same reason it’s now found favour in the culinary arts: its potential for detoxification.  Beauty bloggers and culinary influencers have thrown weight behind the ingredient because they and many others believe it can banish blackheads or even mitigate the damage of a hangover. But don’t go reaching for that charcoal juice just yet.

“Cleanses are very trendy right now,” says Canadian registered dietician Rosie Schwartz. “Activated charcoal can be wonderful in a medical setting, but we just don’t have the studies to show what kind of effect a daily dose will have on your body and how it could interfere with any regular medication you’re taking.” That said, Schwartz says it’s likely benign enough if you’re having it once in a while — good news for the restaurants, cafes and juice bars that have got on board with the trend.

Aaron Beauchamp, bar manager at swanky downtown Toronto BBQ joint Carbon Bar, has been using activated charcoal in his Black Mamba margarita for three years. “We started experimenting with it a few months after the restaurant opened, because we thought it worked well with our BBQ theme,” he said. “Since then, it’s been one of our most popular cocktails. The charcoal is odourless and flavourless, but used to give the rich black colour that makes the margarita stand out.”

Elsewhere, charcoal is popping up in the likes of “detox” lemonades and waffle batters, though don’t expect it on every menu across the country. Like most niche food trends, activated charcoal, in many ways because of its unique hue, is most appealing when used sparingly. And, at least at this time, it doesn’t look like any major retailer in this country will be as dedicated as Ikea Japan, which, last year, introduced an all-black foot long hot dog and bun coloured with, what else, activated charcoal.

See below for a look at how this distinctive ingredient is being used in food around the globe:

More:
Caesar potato chips are back — and we kind of love them
10 foods you’re going to see everywhere in 2017
30 of the best DIY KIEA hacks ever