Can One Appliance Really Replace Most Of Your Kitchen Gear? I Tried It

At $2,000, the Thermomix TM6 it costs nearly as much as most people’s entire kitchen gear setups—blender, stand mixer, slow cooker, and more—but it also promises to replace them, too. We put it to the test.

Earlier last summer, when we started planning a kitchen appliance guide we ran last fall, I got the chance to try out something called a Thermomix. At the time I kept confusing the name with Vitamix, the luxury blender company whose premium models are known for their high power, ability to make hot and cold foods, and self-cleaning functions.

It may have gotten its start as a high-end blender, but that’s where the similarity stops. First introduced by home appliance manufacturer Vorwerk in France, Spain and Italy in the early ’70s, Thermomix began as a countertop appliance that could chop, grate, mix, juice, and blend while cooking. Through a handful of follow-up models, it’s since been developed into a mega-appliance that, its manufacturer says, can perform almost any kitchen task you can think of. What started out as a popular convenience tool to make hot soups and fresh baby food is, in its latest model, a blender that can cook, a slow cooker, a sous vide machine, a rice cooker, and a container to ferment foods. It can chop, sauté, boil, blend, whisk, steam, simmer, mill and grind—even knead dough. It’s equipped with a digital scale for ingredient precision, and an iPad-like device to govern its cooking functions, connect you to an online library of recipes from all over the world developed specifically for this device, and even build weekly meal plans and grocery shopping lists for them. Think of it as a Vitamix-Instant Pot hybrid with at least a dozen other functions. And, at $2099 CAD, it costs nearly three times more than a top-of-the-line Vitamix, and is about as expensive as most people’s entire kitchen setups. 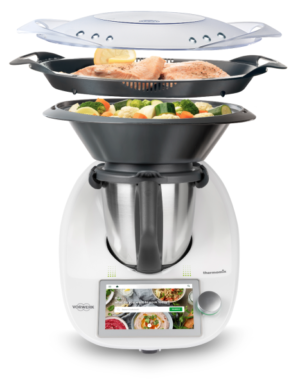 Sold on a direct-to-consumer model and not available in Canada for nearly as long as its 50-year history in Europe, the Thermomix hasn’t quite become a household name this side of the Atlantic. Considering consumers’ growing taste for smart kitchen appliances, not to mention how quickly home cooks have taken to so many kinds of multi-cookers, that may change. But even if the Thermomix can deliver on all the functions it promises to—and for the most part, it does—is it worth it? After testing it out for about a month, I have two answers on this: yes and no. This might sound like a cop-out, but the answer highly depends on what kitchen gear you already own and the way you’re used to cooking.

As mentioned, Thermomix is sold directly to buyers either online or through a network of consultants who personally (or, these days, virtually) introduce you to the product and how it works. The focus on demonstration makes sense, as there’s a bit of a curve in learning to use it—especially if you’ve already established a set of cooking habits, like, say, adding ingredients into a pot for chili in a particular order. The recipes available through the machine’s database (a quirkily named program called Cookido) are very particular in their instructions, down to ingredient order and weights (a built-in digital scale weighs food for you as you go). While it’s possible to use the Thermomix outside of this recipe program, unless you’re doing a simple blend or boil or are already extremely familiar with how the machine works, the results are a bit of a gamble.

But the recipes themselves? There are more than 50,000 of them, from countries all over the world, designed and tested specifically for Thermomix use. The ones I tried—including a Milanese-style risotto, mashed potatoes, sweet potato soup, steamed fish with lime, fruit sorbet, soft-boiled eggs, pizza dough—each came out exactly as described, right down to the minute indicated in cooking time, with the advantage of me being able to step away from the kitchen in between steps until the machine’s little chime told me the latest step was complete.

The risotto is perhaps the best example of this. After grinding roughly-cubed Parmesan cheese into a powder-fine snow in about 30 seconds, the machine had me wipe out the mixing bowl, drop in a quartered onion, garlic cloves and some butter and olive oil. It chopped and sautéed the mix for me while I poured myself a juice. When the onions didn’t turn out as finely chopped as I’d have liked, I pressed a button to go back and repeat the step for 30 seconds more, added arborio rice to toast in the mix for a bit, then water, wine, and a single bouillon cube. Each step of the way, the Thermomix’s digital scale told me when I’d added enough of each ingredient and chimed up when it was ready to head to the next step with the press of a touch-screen button. For the next 14 minutes, it gently cooked and stirred the rice into a perfectly creamy risotto without me once having to check on its texture or add extra broth.

To be able to confidently step away from an otherwise high-maintenance dish like this is impressive, and I’ve gotten the same result in the few times I’ve repeated the recipe since. The same goes for other time- or texture-sensitive foods, like soft eggs or rice; it’s nice to be able to step away and put them out of mind, even if that only ends up meaning a couple of extra minutes to scroll through your phone. A huge bonus: the steamer attachment, which is placed on top of the machine’s cooking pot, works in tandem with other functions, meaning you can cook a soup or stew while steaming a side of vegetables above it at the same time. 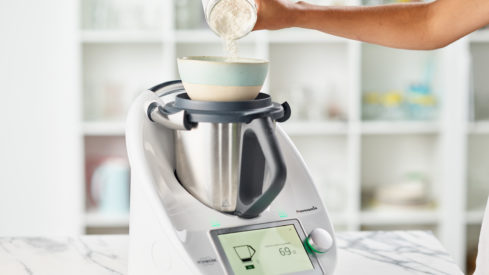 I wouldn’t go as far to say that this peace of mind is worth two grand, but that has more to do with my kitchen budget and hesitance to relinquish the kind of control needed for the Thermomix to really do what it does best. I am, at heart, a kitchen tyrant. It calms me to watch the things I’m making as they’re simmering or searing along, and I genuinely believe paying attention to the sensory experience of the process—knowing what fully steamed rice smells like, what caramelized onions feel like when stirred—are what makes me a better cook, and that isn’t the way this machine works. Many steps involve a closed lid that isn’t opened until after the step is done; you go back and repeat or tweak what you need to, removing the mindfulness aspect of the process. This will, to a lot of people, sound like an overly romanticized description of cooking. It’s also why I think deciding whether this appliance is worth the hefty price tag isn’t a simple yes-or-no answer.

If you don’t already own a high-powered blender, a stand mixer, a slow cooker, a rice cooker, a sous vide and a steamer, the Thermomix makes an adequate stand in for all of these—if you have the budget to shell out two grand. It’s also extremely well-suited to households who’d prefer to relinquish control over cooking in exchange for guaranteed results in a short amount of time (did I mention it has a self-cleaning function?), or home cooks who value the kind of precision the Thermomix offers (there’s a reason high-end restaurant kitchens use them for emulsified sauces). There’s plenty of dishes I’d only ever want to cook in the Thermomix—including that silky, fail-proof risotto—but far more I can think of that simply bring me more pleasure to make the way I always have.