3 Tricks That Make My Vegetarian And Vegan Meals More Satisfying

How to make your meat-free meals taste good and leave you feeling nourished. 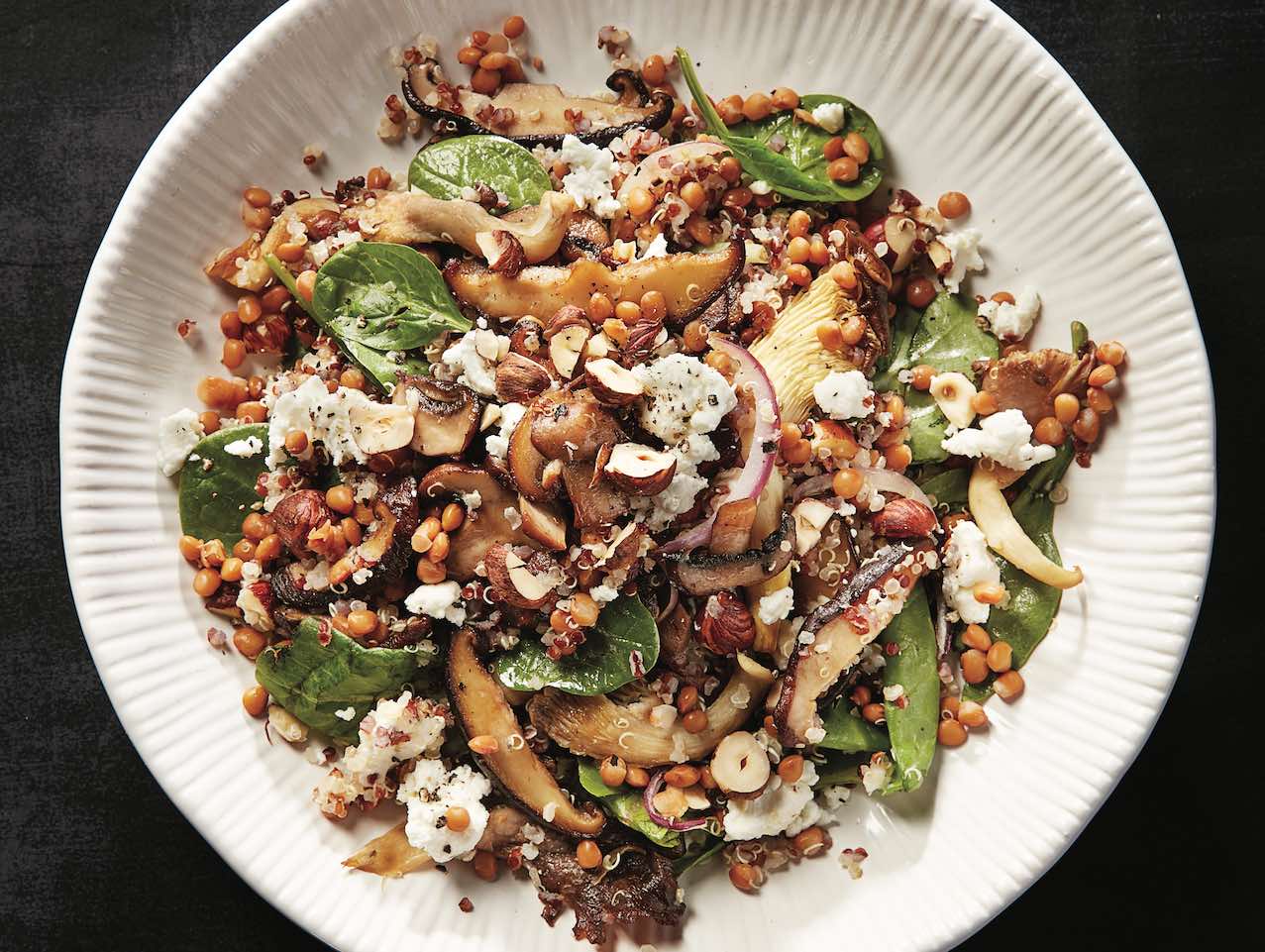 I haven’t eaten meat since the 1990s, so believe me when I tell you I’ve experienced the full gamut of vegetarian and vegan cuisine—from bad to boring to incredible and everything in between.

While high-end chefs using premium ingredients have an advantage, the fancy quotient is not what makes the meal. I’ve had multi-course dinners at Michelin-starred restaurants (thank you, career in travel and food writing) that were far less enjoyable than the $5 bowl of black bean soup I used to get at a local spot.

The secret, I’ve learned over the years, is to think beyond deliciousness. For a meal to be memorable, it has to be satisfying. To me, that means it tastes good, it’s enjoyable to eat, and it leaves you feeling nourished.

But what does that mean in practice? I gathered some of my own lessons and tips from experts to round up three tricks that make vegan and vegetarian meals more satisfying. 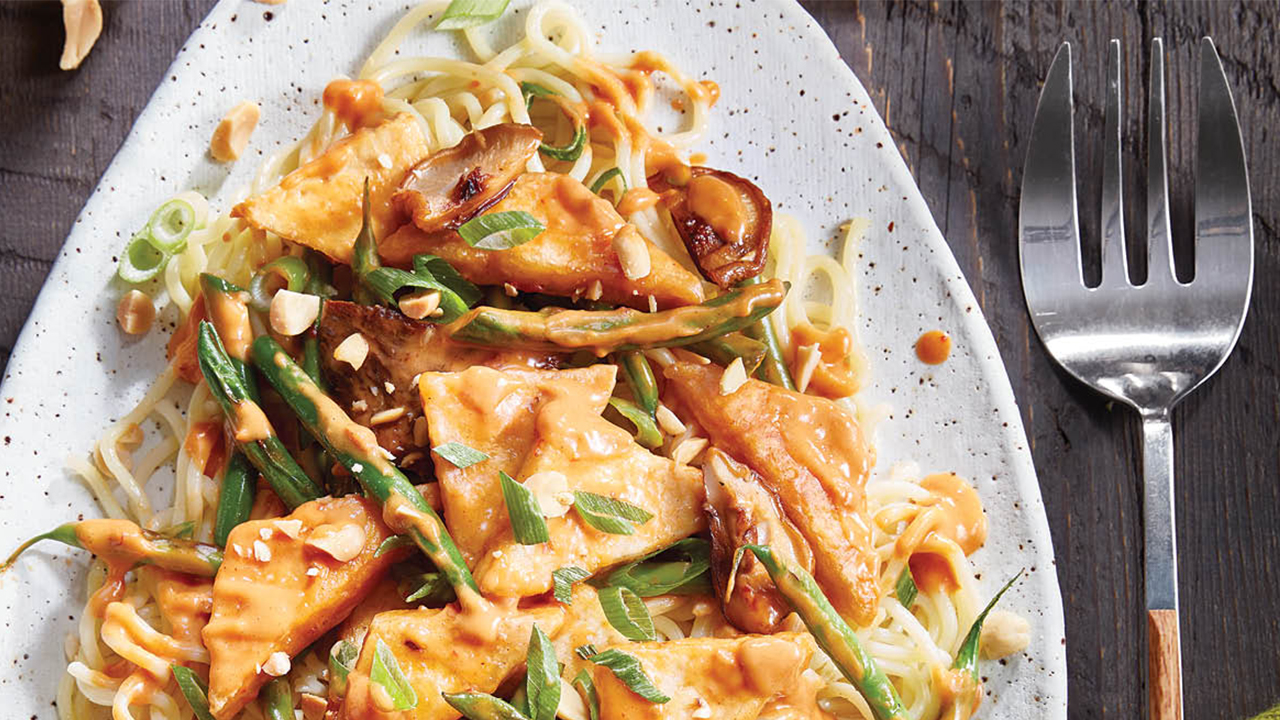 “A lot of the clients I work with think that a plant-based diet is just veggies and maybe some sort of starch,” says Whitney Hussain, a registered dietitian in Vancouver. “But if you’re not getting enough protein in your meal, you’re going to feel super hungry an hour later.”

Convenience products like faux chicken nuggets and veggie burger patties are typically protein-rich thanks to ingredients like pea, soy and potato protein. But they are often ultra-processed foods, and Hussain prefers to steer clients toward what she calls “real foods”—lentils, beans, edamame, tofu, nuts and seeds—to create balanced plant-based meals.

And while it’s a myth that you can’t get enough protein from plant-based foods, it is absolutely possible to design vegan meals that are low on this essential macronutrient. (Think: pasta with tomato sauce, white toast with butter and jam, or stir-fried vegetables and rice.) Canada’s Food Guide recommends that one-quarter of your plate should be filled with “protein foods.” But if your proteins are whole foods like beans, lentils and nuts, Hussain suggests going higher than a quarter, as they contain a lower percentage of protein than foods like meat and eggs. (That, by the way, isn’t a bad thing! It means they include lots of other nutrients, too.)

While I keep a few “fake meat” products in the freezer for occasional use—I recently made a really delicious Chinese-style ginger “beef” noodle dish using Impossible ground, and Big Mountain Foods Cauli Crumble is really good in tacos—I try not to let them become an everyday thing. Frozen edamame are a staple for me—they can be used to round out just about any meal. I love red lentils for how quickly they cook. And while protein shakes are overkill for most of us who aren’t pro athletes, I keep protein powder on hand to boost smoothies and oatmeal. (I’m not big on added flavours or stevia, so I tend to go for plain pumpkinseed protein for its neutral flavour.)

I’m not vegan, so I get some of my protein from eggs and dairy. But Hussain cautions that relying on dairy for protein could mean missing out on key nutrients like iron and other minerals. “I would also choose some higher-iron options from things like tofu, beans, lentils and nuts and seeds,” she says.

Beyond protein, there are other nutritional elements that help with satisfaction, too. One of these is fibre, which is fortunately easy to get plenty of when you’re eating lots of vegetables, whole grains and legumes. “The fibre will really help people stay full for a longer period of time,” Hussain says. Fat also helps with satiety, she adds, and has the added benefit of helping your body absorb fat-soluble vitamins (that’s A, D, E and K).

And don’t forget about calories, which give you energy. “Some vegan and vegetarian proteins and preparation techniques tend to be on the lower-calorie side,” Hussain says. “Don’t be afraid of adding more protein or healthy fats to your meals to make sure you’re getting enough calories to feel full and meet your nutritional needs.” 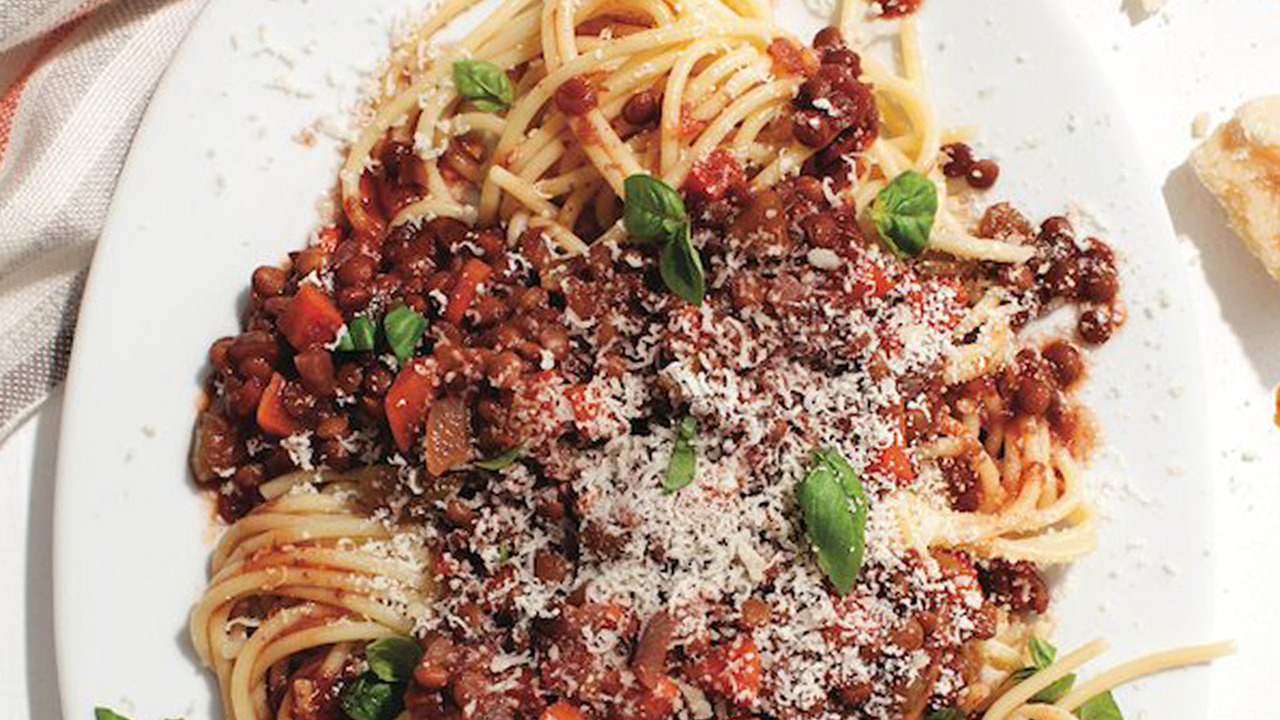 “I always like to have three-textured dishes: something unctuous, something with a bite and then something with a crunch,” says Chanthy Yen, executive chef at new plant-based restaurant Nightshade in Vancouver and personal chef to Prime Minister Justin Trudeau and his family.

Yen likes to think of building layers in a dish, from soft to crispy, “so your mouth is constantly excited and your tongue is having a good time.” Foods with bite might include filled dumplings, pan-fried gyoza, chestnuts or pecans, while he often covers the crunchy category with various kinds of pickled vegetables. One of his favourite shortcut ingredients is crispy shallots, which you can buy packaged or make at home. “Add them to a roasted eggplant dish or a mushroom taco,” Yen suggests. “It just adds another level of excitement.”

Another texture to think about along the lines of bite is chewiness, which Hussain says some people might miss from meat. In a tomato sauce, for instance, she finds that “green lentils help to get that chew and that bite people are missing from ground beef.” (Try it in this Lentil Bolognese recipe.) Textured vegetable protein, or TVP, and soy curls, she adds, are convenient pantry staples that can be rehydrated in water and add a meaty chewiness.

And then there’s tofu, which comes in so many iterations it can check just about every texture box. Soft tofus have a texture that’s creamy and almost eggy, while extra-firm tofus are chewier, especially when water is pressed out. (Tip: Hussain suggests storing tofu in the freezer, partly so it will keep for longer and partly because freezing then thawing improves its texture.) And Yen enjoys cooking with yuba, or dried tofu skin, for some extra crunchiness. “Deep-fried, it is so delicious and crunchy and flaky,” he says.

Nuts and seeds are one ingredient I always keep on hand as a topping for extra crunch and nutrition: cashews are nice on a chickpea curry, pumpkin seeds are a fun filling for quesadillas, and sunflower seeds are tasty on salads. I always find it’s worth the effort to toast them first, to bring out the flavours. When I’m organized, I’ll toast a big batch to have on hand so they’re ready when I need them.

Nuts can be useful when aiming for unctuous, too. Yen suggests cashews, for instance, as an ingredient in an emulsion, sauce or pudding. Salt-roasting vegetables before pureeing is another trick, he says, as “the salt draws out moisture, causing the roasting process to make the flavours more concentrated.” 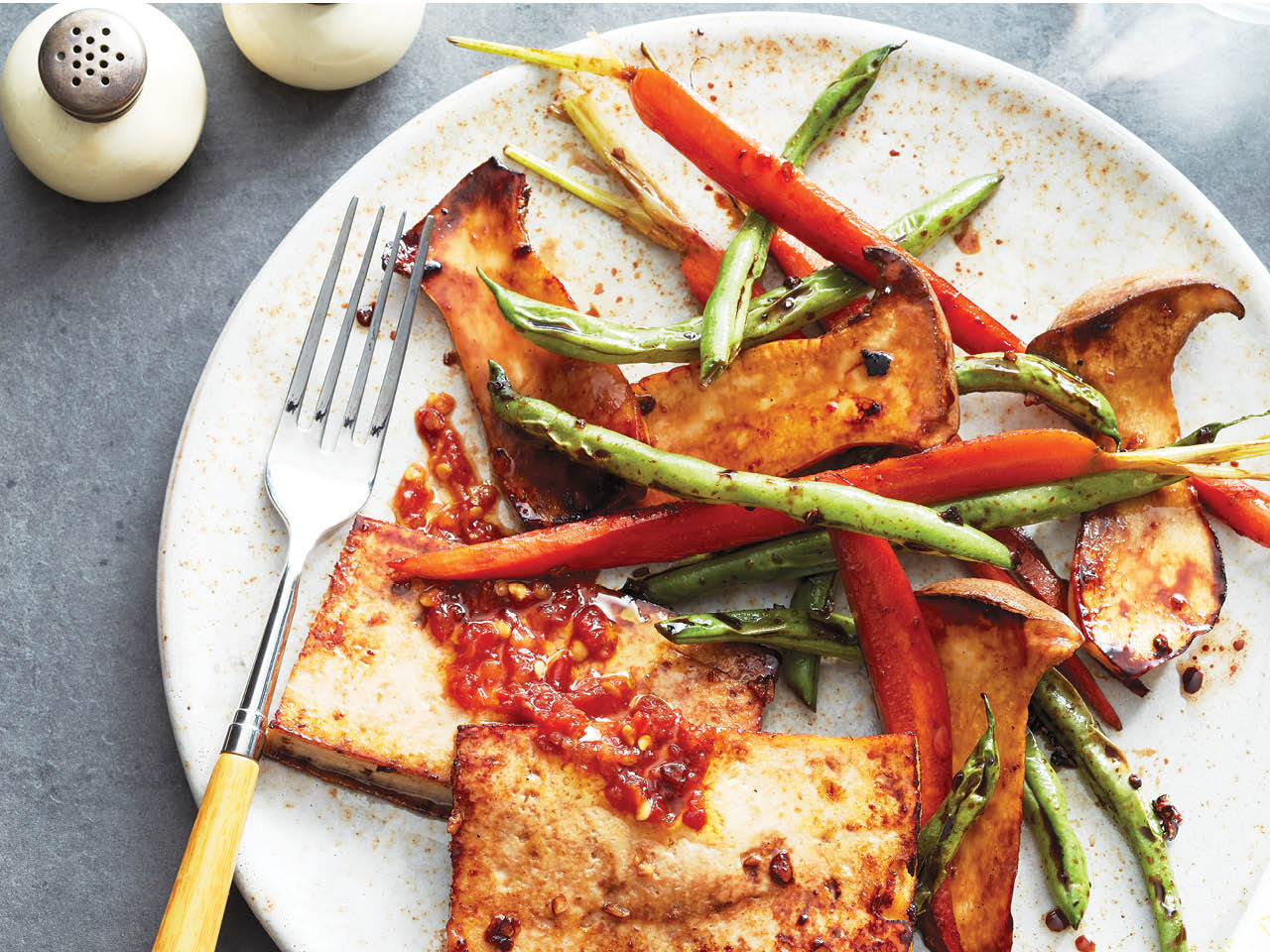 The same goes for sauces and dips: a vegetarian take on your favourite recipe might be just as satisfying if the meat wasn’t the star of the show. (For example, while I actually don’t think I have ever had butter chicken, I am a big fan of butter chickpeas.)

There are also lots of spices and other ingredients that can add depth of flavour and umami to dishes. A good stock is essential, and while lots of people swear by homemade, there is only so much time in a day; I rely on my jar of Better than Bouillon stock concentrate. I like the concentrate because I can adjust quantities depending on the recipe. While I haven’t played with it much on my own yet, some people swear by Marmite as a flavour enhancer, like in these Jamie Oliver veggie burgers. And soy sauce and many other Asian sauces “add a lot of that umami punch as well,” says Hussain.

As for Yen, he votes for alliums: not just those crispy shallots but also caramelized onions and pickled garlic, a Cambodian staple he suggests using in hummus or “anything that’s salsa-related” for a “tangy pungency.” Food waste tip: If you are making crispy shallots or any other aromatic that’s fried in oil, he suggests saving the oil to use for an extra-flavourful salad dressing.

If you’re a fan of smoky flavours, smoked paprika is nice to have on hand—it’s amazing how far just a little bit goes—and liquid smoke is a secret ingredient in several of my favourite recipes from the Rebar Cookbook. British cookbook author Anna Jones, meanwhile, likes to use something called smoked water.

And then, of course, there are mushrooms, which are chewy, flavourful and nutritious—a plant-based triple threat. Even if you’re not a mushroom person, consider experimenting with them in recipes as more of a supporting character than a main role. Dried mushrooms, especially, can add a huge amount of flavour, even if you’re only using a little bit, or even just the soaking water. The world is your oyster mushroom.