The New Flavour Of Chocolate Everyone Is Talking About

Everything you need to know about ruby chocolate. 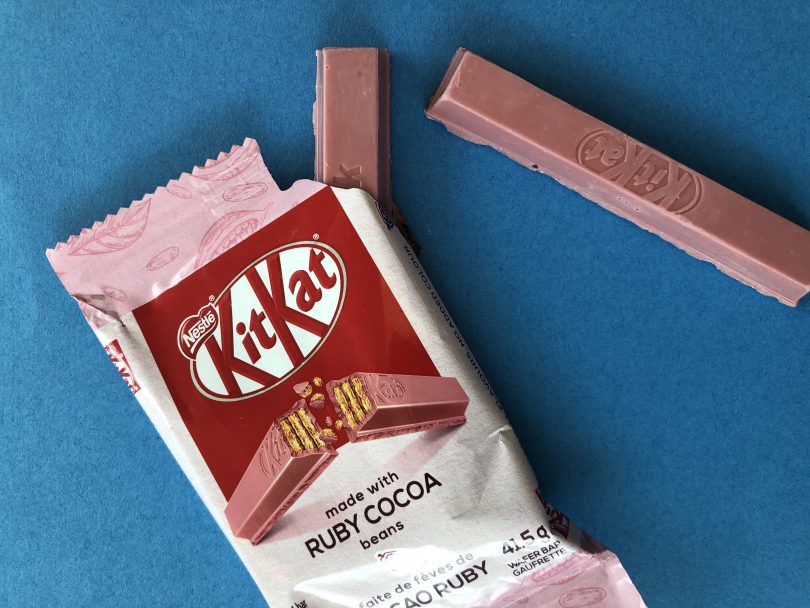 Whether in bar, truffle, disco egg or molten lava cake form, chocolate is one of the world’s greatest inventions. We thought we knew everything there was to know—the last big development was in the 1930s, when Nestlé started selling a white chocolate bar. That is, until Swiss chocolate giant Barry Callebaut AG unveiled a newly discovered variety at a Shanghai launch event that’s naturally pink. Where, we wondered, were these pink cocoa beans hiding all these years? Two years later, what the company calls “ruby chocolate” is finally widely available in North America. Here’s what you need to know.

Why is it pink?

Callebaut started developing its recipe for this new chocolate 15 years ago, using select cocoa beans harvested in Ivory Coast, Ecuador and Brazil. The company’s recipe is a secret as closely guarded as nuclear codes. Although Callebaut won’t reveal much, they swear the colour is natural and involves no additives, artificial flavour or genetic modification. Reporters on the chocolate industry beat have speculated that the pinkness comes from how the beans are processed—likely because the company skips the typical bean fermenting process that turns cocoa beans brown and gives chocolate its distinctive flavour.

How do I get my hands on some?

After testing the market for ruby chocolate products in Europe and Asia, Nestlé, the first manufacturer to start using Callebaut’s ruby chocolate in mass production, has now released Kit Kat Ruby bars in Canada (they were briefly available here at special pop-ups in 2018). If you’re in the U.S., you’re out of luck: Hershey, which hasn’t yet jumped on the ruby chocolate bandwagon, makes America’s Kit Kats.

So how does ruby chocolate taste?

In a word: fruity. A few days after Kit Kat Ruby bars were released, we grabbed the last three at the nearest Shoppers Drug Mart. The ruby chocolate had a notably waxy lecithin consistency—but so does the regular milk chocolate Kit Kat. Its flavour is somewhere between sugary white chocolate and a mixed berry milkshake. Much like with a red velvet cake, the taste of chocolate seems to float in the distance, just out of reach.

It’ll satisfy a sweet tooth, but not your 2 p.m. chocolate craving.