The New Roll Up The Rim, Explained

No more paper cups to enter. 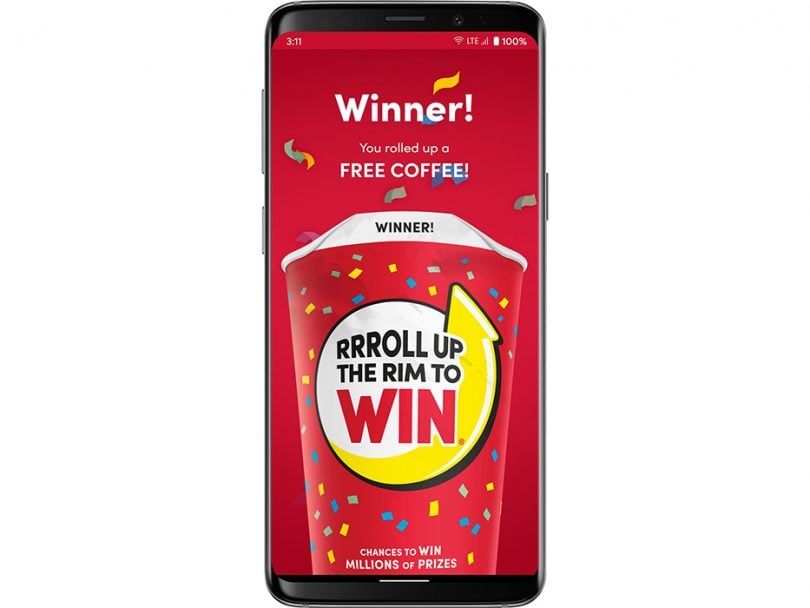 Update March 7, 2020: In “light of the current public health environment,” Tim Hortons announced on Saturday that it was removing paper Roll Up The Rim To Win cups “for the health and benefit of guests.”

“Tim Hortons does not believe it’s the right time for team members in our restaurants to collect rolled up tabs that have been in people’s mouths during this current public health environment,” the company said in a press release.

The chain said it was “redistributing all $30 million of prizes to restaurant giveaways and the digital Roll Up The Rim contest” and that the company would “appropriately recycle” all the scrapped paper cups.

The move came a day after Tim Hortons said that it would be temporarily suspending the use of reusable cups and mugs at its stores, also due to health concerns, and cancelled a reusable cup giveaway scheduled for the day before the contest started.

The company does plan to go on with their Roll up the Rim contest, with a combination of digital and in-store play, and any guest who brings a reusable cup in will still be eligible for the three digital “rolls,” or entries (see below). Read on for more about the contest.

Roll Up the Rim to Win is officially back for 2020. Starting on March 11, Tim Hortons’ annual contest will have still have Canadians crossing their fingers in hopes of winning a free coffee or doughnut.

This year, however, Timmies has totally revamped its iconic contest—and made even more changes just before the 2020 edition of Roll Up The Rim was due to start in light of concerns over COVID-19. The coffee chain was already going digital in a bid to get Canadians on board with its updated loyalty program and app, but this year it’s also ditching paper cups over fears about the coronavirus. This revamped promotion also comes as Tim Hortons’ parent company announced a decline in sales last year.

There’s been a lot of confusion over the new version of the iconic sweepstakes. (Beforehand, the hardest part of the game was rolling up the rim.) Here is everything you need to know about this year’s revamped Roll Up the Rim.

The contest this year will be focussed around the company’s digital app and restaurant giveaways after the company announced it was scrapping the iconic RUTR paper cups and that it wouldn’t serve any drinks in reusable cups amid fears over COVID-19.

How do I play with a Tim Hortons paper cup?

The company is scrapping the use of paper cups with a rollable rim to enter the contest amid coronavirus fears, and will be moving the prizes to a combination of digital “rolls,” or entries, via the company’s app and restaurant giveaways for the first two weeks of the contest. “Tim Hortons is redistributing $14 million of prizes currently under the rims of Roll Up The Rim cups to $14 million of free coffee and hot beverage giveaways at restaurants for guests who make a coffee or hot beverage purchase* – approximately $1 million per day for the first two weeks. This also represents 1:9 odds per transaction at participating restaurants,” the company announced on Saturday.

“Tim Hortons recognizes that some guests will miss the excitement of rolling up the paper cups, even for good reason given the current public health environment,” the company said.

How do I play Roll Up The Rim digitally?

Customers who buy an eligible drink will get their app scanned in store, and get a least one entry (or up to three with a reusable cup, though the company won’t actually serve you your drink in a reusable cup amid health concerns).

The company said on March 7 that “All the other prizes currently under the rims of Roll Up The Rim cups, including cars, TVs, reward miles, pre-paid gift cards and Tims gift cards can now be won through the digital Roll Up The Rim Contest that runs for the entire four-week period.”

How do I play Roll Up The Rim in a participating store?

The company said on Saturday that “Tim Hortons cash registers, at participating restaurants, are being programmed to randomize the coffee and hot beverage giveaway and winning guests will automatically be credited for their beverage at the time of purchase,” with prize giveaways of about “$1 million per day for the first two weeks” of the contest.

Can I play with my reusable cup?

The company produced 260 million single-use cups for last year’s contest alone. That’s a lot of plastic waste—according to Greenpeace, Tim Hortons is one of Canada’s top plastic polluters, and the company’s cups are frequently found in shoreline cleanups. Initially, it was reported that those who want to participate in the sweepstakes can do so without having to use a single-use cup. On March 6th, however, Tim Hortons announced that they will be temporarily suspending the use of reusable cups in all stores. For those who bring in a reusable cup and buy an eligible drink, the restaurant will still honour the three digital “rolls” previously described—but they’ll receive their drink in a paper cup. (Those who wanted to play without using single-use cups are out of luck.)

It was initially announced that the company would be giving away 1.8 million reusable polypropylene cups at participating locations across the country on March 10 on a first-come, first-serve basis. The giveaway has been cancelled until later this year.

So, I have to download an app to play?

The company is really trying to get customers to download the app and join the rewards program by offering more “rolls” for those with the app. If you just want to cross your fingers at a participating store for the first part of the contest, you don’t need the app to play. If you want to play for the full four weeks, or earn extra “rolls” when playing physically, the Tim Hortons app for iPhone or Android—and a Tims Rewards membership—is mandatory.

While Tims says that this new digital-forward gameplay mode is a step towards modernizing the brand and Roll Up the Rim, some people see the new app’s role in the game as prohibitive to those without internet or a Tim Rewards account.

What is this rewards program I keep hearing about?

Earlier this month, the company announced an expansion of its loyalty program, Tims Rewards. Starting February 26, Tims Rewards will become a points-based program. Members earn 10 points per transaction and the rewards start at 50 points. Tims Rewards can be accessed on the Tim Hortons app or with a physical card.

You must be a registered Tims Rewards member to access digital “rolls” or to access bonus “rolls” as well as “rolls” earned from using a reusable cup.

What prizes can I win?

Tims is also getting rid of the dreaded “Please Play Again.” Now, participants will be entered into one of four weekly $100,000 draws whenever they “lose.” Participants have to use the Tim Hortons app to be entered into the draw.

What are my odds of winning?

According to the Financial Post, customers using the app will get more chances to play, but the value of the pool of prizes has been cut by more than half—this year they’re worth roughly $29.9 million while 2019’s total retail value was about $71.3 million. With the late-breaking changing over COVID-19 fears, the company said contestants have a 1 in 9 chance of winning a coffee or food prize. Last year, odds were 1 in 6. According to a Tim Hortons spokesperson, “The odds this year are better than last year when you consider the odds across paper cups and digital-based on expected play digital rolls have 1:6 odds, or better.”

On Saturday, the company said “Tim Hortons expects that digital odds of winning a coffee, hot beverage or baked goods will be better than the 1:9 odds at restaurant,” though the final odds would be determined by the number of people who play.