How COVID-19 Has Changed My Relationship to Cooking

Before the quarantine, everything involved in meal production was a welcome break from my responsibilities—not just another thing to do at the exact same time as work and parenting. 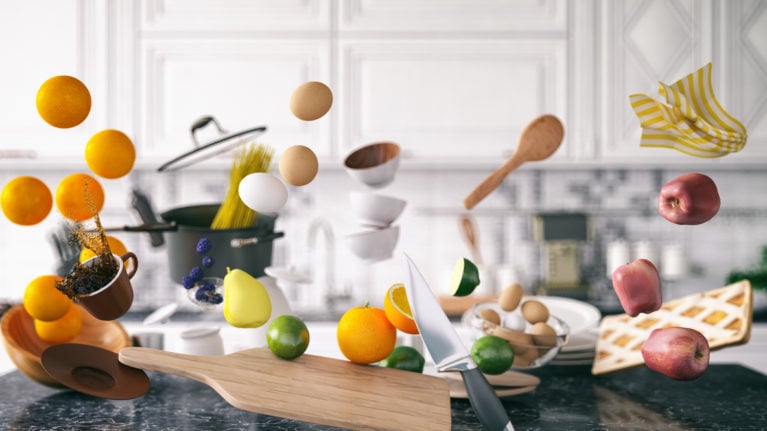 My first memories of cooking aren’t about the act of it, but rather about answering the phone. At 12, I was introduced to the responsibility of coming home from school on my own, doing my homework without direction, maybe fixing a snack. Most afternoons, a few minutes after I got home, the phone would predictably ring with a question from my mom: have you taken dinner out of the freezer yet?

Sometimes “dinner” was a pre-cooked meal that had been frozen forever. Other times it was a grocery store lasagna for me to shove into the oven. Best was when her request was to take a cut of meat out to thaw in time for when she got home. That meant she had something special in mind: a key ingredient needed to leave the freezer to be turned into what she’d been craving that day at work, or something she thought would cheer up whoever needed it that time.

In every case, the request was clear. Have this ready for me when I get home. I will take care of the rest.

My mom stayed home to raise me, my brother and a host of other kids as a childcare provider for almost a decade. The phone calls began after she returned to her earlier career in accounting, and felt weird about the switch. Her tics about dinner were the only clue to her anxiety at the time, and I wasn’t always sensitive to it.

Once, I forgot to take a pack of chicken out of the freezer (more than once, but this is the time I remember). What she’d said in frustration when she got home has stuck with me since: Just help me make dinner. This plea was my first real lesson in what cooking actually is–a series of steps extending well beyond anything to do with knives or cutting boards or frying pans or a stove. It turns out that when she turned a pack of drumsticks and canned beans into arroz con pollo, it wasn’t because it was some tender memory of where she came from, but an efficient and forgiving meal for freezer-burned chicken.

Twenty years later, I’ve been thinking about that lesson a lot in the weeks I’ve spent hunkered down at home with my husband and small child. As an avid home cook for much of my adult life, I’ve generally been the one to make dinner. My husband, who is involved in childcare and capable of scrubbing down the shower, is at a loss to make much more than burgers or spaghetti for dinner. These are things he likes and therefore knows to make well, and they make him our kid’s hero. But they aren’t what we should be eating multiple times a week, and I don’t want to anyway. So, if I’m being honest, I’m not just happy to do the cooking. I’m sometimes a bit aggressive about it.

As the person who cooks in my household, I am also the one who plans the meals, keeps the grocery list, wonders if we’ve eaten too much meat this week, muses on a Thursday about what might be a nice treat for Sunday, and is always mindful of what we were running out of in the fridge. Even as things have improved in recent decades, in hetero households this work has never been equal. Data from the Organization for Economic Co-Operation and Development has Canadian women working 3.7 hours of unpaid house work for mens’ 2.5 as recently as last year.

And as the New York Times reported last week, the conditions of quarantine life for hetero-led nuclear families has deeply exposed, if not exacerbated, this gap. “The way we’ve been able to MacGyver a career as a woman is completely under attack by a global pandemic,” one source says, pointing out the direction in which domestic work tends to funnel when schooling, day care, outside meal options and public space are suddenly off the table. Plus, an already-existing wage gap is a strong deciding factor in many households when there’s a decision to be made about who’s video conference call takes priority over figuring out, say, the serpentine maze that is digital homeschooling.

Even as someone who likes to think of herself as attuned imbalances such as these, it was easy to not to think about what dinner depended on too acutely before the quarantine. Back then, everything involved in meal production was a welcome break from my responsibilities, not just another thing to do at the exact same time as work and parenting.

For one thing, dinner wasn’t a nightly responsibility. There was takeout once a week, and semi-regular plates of fried carnitas or a chunky minestrone brought over by parents or in-laws, still steaming and wrapped in tin foil. For another, meal planning and shopping weren’t as fraught: the grocery lists I write these days have to last longer, account for every meal and snack of the day and cut down on food waste in ways I haven’t had to think about before. Since the pandemic’s economic disruptions have also affected our household income, this has to be done on a stricter budget—making days when our toddler decides that every kind of vegetable I’ve bought for the week is unfit for consumption feel like a new kind of stress.

It’s become clear that while my mom’s cooking lessons seemed to be about time and ingredients, they were really about the every-day, every-minute work involved in keeping a family fed well and with love, as healthily as you can, with food that makes sense in the reality of your day-to-day life. It’s work, though it’s rarely recognized as such, even though many households have always felt the crunch I’m now getting used to.

When my mother clipped coupons for flour and soup out of local flyers, for example, this was cooking. When she carted my brother and me off to the grocery store and bargained with us over what was an acceptable week’s worth of Dunkaroos, this was cooking, too. And when she made day-of decisions about thawing a meal or using a perishable ingredient, it was perhaps the most important part of what we should consider to be feeding ourselves and others.

She was anticipating what needed to be done, and often, this anticipation didn’t require help from 12-year-old me at all. She’d already done the work of figuring out what was affordable, what we had available, what we might like to eat and therefore what she’d want to make—calculations I now understand as taking real time and mental energy. When she called me after school, it was because I was the last chance at avoiding a takeout meal, which for a chunk of our lives wasn’t something to enjoy on a whim.

It’s been six weeks since I last saw my mother. Can you tell I miss her? I haven’t said it in actual words this entire time, but she could still tell. Last week, she drove by our home and left a plate of carnitas at the door, wrapped in tin foil. She waved at us from the sidewalk, blew kisses to her grandson. I waited a couple of minutes before I went to get the plate. By the time I picked it up, the dish was cold.

This was, of course, an act of love; a mother’s assurance that regardless of what we’re going through right now, things are going to be okay. That’s the part of home cooking that’s been idolized—it’s the stuff a million food memoirs are made of. But her gift also required labour, even if it’s work society would rather not think about. The daily calculations I’ve described are absolutely mundane. They’re also honest, meaningful parts of the equation that puts dinner on the table.