“You can find a million recipes online–but what goes on behind the recipes is more interesting.” Yotam Ottolenghi and Ixta Belfrage discuss their new book, Flavor. 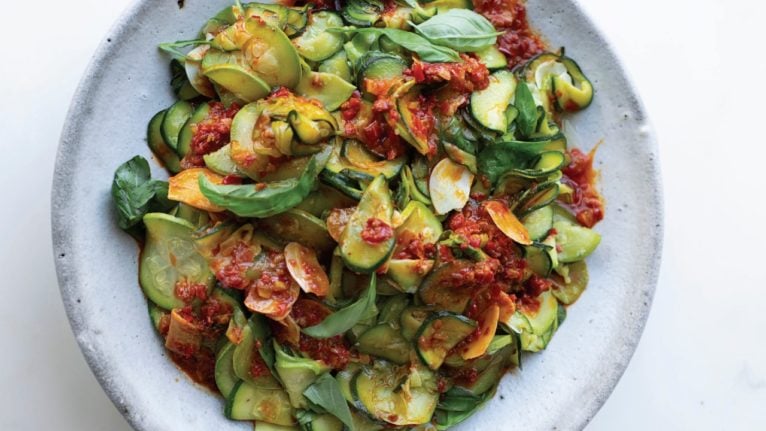 Earlier this summer I posted a picture of a dish I really liked and had made a couple of times that month. “This is an Ottolenghi recipe, isn’t it,” someone messaged me. “No one else would insist I find ground lamb.” And indeed, it was; few contemporary cookbook authors have a style as instantly recognizable as London restaurateur Yotam Ottolenghi. These are recipes that, lamb aside, focus on cooking vegetables as a delicious end goal in and of themselves—whether it’s seasoning and grilling cauliflower like you might a cut of meat, or roasting eggplant beyond what Western tradition insists and using its silkiest version of itself for smoky dips, soups and salads.

You’ll find a lot of that philosophy in Flavor, out in North America this month and written with Ottolenghi’s test kitchen collaborator Ixta Belfrage. Written as a follow-up to his vegetable-focused books Plenty and Plenty More, what sets Flavor apart from its predecessors is its focus on explanation—there are in-depth profiles of the cooking techniques and flavour pairings at play in these recipes—and influence from Belfrage’s culinary background. Her Brazilian heritage, family roots in Mexico and a childhood spent in Italy come through in a lot of the book’s exciting and delicious flavour combinations: soy-cured egg yolks mixed into a tamale-like polenta for a creamy swirl of umami, black bean stew infused with coconut, chilies and lime. There is a particularly good recipe for a mushroom-lentil ragu that relies on coconut cream for fat that is so good, it would never occur to you to describe it as meatless.

I spoke to Ottolenghi and Belfrage about the recipe development for this book, what they think of fusion cooking and their trustiest kitchen tool.

The buy-in from home cooks about vegetables and focusing on plant-forward cooking is different than it was when you first started writing cookbooks. What’s the next step in talking about celebrating their flavour and their potential?

Yotam Ottolenghi: Well, I think you need to let the vegetables do the talking, rather than talk yourself. Because I don’t think anyone can just be convinced to eat something that they wouldn’t naturally gravitate towards—I mean, they might—unless they’ve had some really great experience with it. And I’ve always thought, you know, there’s so many good reasons, to cook with and eat vegetables but people are really only going to eat them if they’ve had good experiences.

The argument we’re making throughout the book is that if you create a complex, delicious experience for people, they will probably come and join you and try the food, rather than you try to explain it.

Where do we still get stuck when it comes to cooking vegetables?

Ottolenghi: I think that people that have grown up with a particular way of cooking vegetables, they find it difficult to imagine other ways. So things like brussels sprouts, or cabbage, or even potatoes are often seen as…kind of there’s only one way to cook them. And what we try to show there are ways to make a much more interesting experience. That there’s no reason why you should just boil or steam them when there’s many other ways to cook them and inject them with flavour. And that kind of the mission statement of the book: there are things that might seem familiar, things you’ve cooked before and think you know what you’re doing. Put them in a different context and allow the flavour to jump out.

There’s some produce this book returns to again and again, like mushrooms and eggplants. What are your favourites?

Ixta Belfrage: The celery root recipes are definitely a good example. They’re three dishes that come out of one process. You slow roast it for two to three hours, depending on how thick it is, and in the process it becomes this soft, brown, caramelized version of itself. And then you can use it to make three different dishes, and they are completely different. Another one that’s typically looked upon as pedestrian is the onion. It’s the most common vegetable, really, but I think we’ve made a few recipes that really highlight its potential.

Flavour-wise, this book pulls from a lot of cultural influences: Mexican chiles and tamales, Korean and Thai seasonings, Italian dishes. Were you drawn to particular cuisines and their approach to vegetables?

Ottolenghi: I think if you look at the Northern European, North American way of looking at vegetables, you learn that we’re actually quite deprived of interesting ways of cooking vegetables. In the Mediterranean, Asia, South America, the cuisines are often more creative in the way they use them and there’s more options in terms of aromatics. We didn’t find just one part of the world to draw inspiration from: whether it’s from India, North Africa, the Middle East, Mexico, they all have their own particular approaches. We just find it really inspiring to draw from wherever there’s something interesting going on; we’re happy to go there (not literally, these days) and try those flavours, recipes, techniques.

You spoke a couple of weeks back with the CBC about this as it relates to fusion cuisine. You described it as the way forward, at least when it comes to recipe development.

Belfrage: A lot of people doubt that fusion can work. And I think that’s because over the last couple of decades fusion’s gotten this connotation as sort of confused and all over the place. And too many flavours that don’t make sense together. So it’s gotten a bad rap.

I think the way we’ve done it and what we mean when we say using flavours considerately is that first, of course you need to acknowledge where ingredients are from and tell that story. And more than just making people aware of where an ingredient is from, what culture it’s from, also thinking about what flavours it brings. Breaking it down to whether it’s sour or sweet or fatty, and pairing it with ingredients that work well with what you’ve chosen.

We’ve got a recipe for a fusion caponata, a combination of ma po tofu, which is a Szechuan dish, and caponata, which is Sicilian. It sounds kind of crazy, but if you think about the vegetables you’re using in a caponata—aubergines, tomatoes, pine nuts, raisins—and think about the flavours of Shaoxing wine and soy sauce and silken tofu. Why wouldn’t they work together?

This book also takes time to explain the process and science of what’s going on behind some of the techniques or flavours you employ, more so than in previous books. Why that approach?

Ottolenghi: We felt there was a really cool story to tell. People really enjoy understanding why it is that a certain dish is so good, or so effective in its complexity. These parts of the book aren’t essential—you can just cook the dishes, and get insight into how they work by cooking them—but if you want to understand more, these parts tell a story. And we found that there were different answers. Some explanations involved how you cook the ingredients, what you pair them with, or even just the choice of ingredients themselves.

It feels like a focus on knowledge of skills and techniques over the recipes themselves.

Ottolenghi: You can find a million recipes when you turn on your device. But what goes on behind the recipes is more interesting. That knowledge is not so easy to come around. To understand why something goes wrong—and also when things go right.

What’s one piece of kitchen gear you found yourself using more often than not when developing and cooking these recipes?

Belfrage: I think that would definitely be a food processor. People might think it’s shameful to have one, and do the whole slog of chopping everything by hand. There’s this belief that processors have a detrimental effect—for example, onions won’t fry or sauté as nice if you put them through a food processor. I really disagree with that. It’s been a lifesaver in so many recipes in the book. 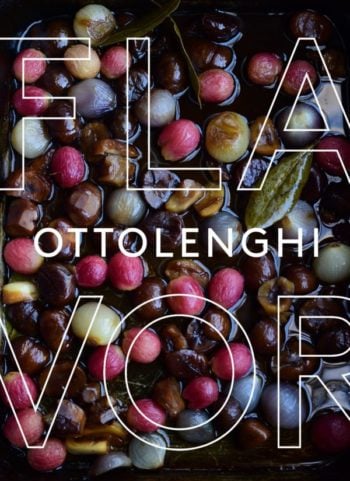