Your slow cooker is a heavy-hitter when it comes to cold-weather cooking—you just need to know how to use it correctly in order to take full advantage. 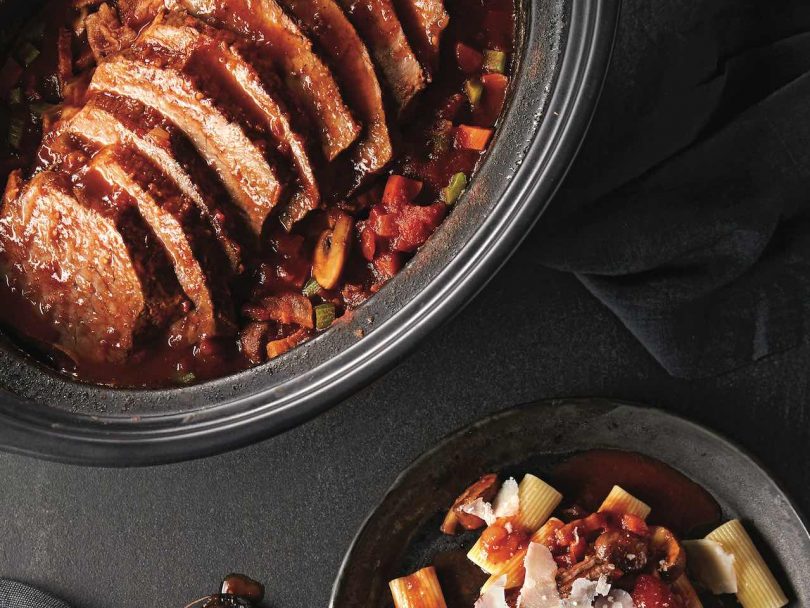 Slow cookers are very divisive appliances—you’ll find just as many people who claim to never use them as you will those who rely on them for the bulk of their cooking. I believe the reason for this is that while there are tons of delicious slow-cooker recipes, there are just as many bland and mushy ones. This situation can be remedied with a few basic tips that will make every dish come out a winner:

Sorry to start with such an irritating reminder, but it will help. All slow cookers or ‘crock pots’ are similar in principle but have different settings. The manual is your first shot at getting it right. In particular, your manual will indicate the optimal level that you should fill the basin or liner to for even cooking.

Tougher cuts of meat are derived from parts of the animal that are exercised more often, so they tend to be lower in fat and richer in taste. These two attributes make them the perfect candidate for your slow cooker. An extended cooking time at a low heat will result in very tender meat with a wonderful depth of flavour.

Remove as much fat as you can before adding meat to your slow cooker. Residual fat will be rendered as it cooks and excess fat will sit in a layer at the top of your food, resulting in a greasy texture.

Browning your meat before adding it isn’t a must, but it’s highly recommended.  This step is often avoided—because we all want to just toss the ingredients in—but browned meat will add a richer flavour to your finished product.

Because there is no evaporation in slow cooking, recipes require less liquid. If you are adapting a recipe to suit your slow cooker, keep this in mind and reduce the amount of liquid you use.

Before you add anything, lightly spray the liner with cooking spray. It will help with the clean-up later on.

If cooking with hard, raw vegetables that you know require a longer cooking time, layer them at the bottom of the pot where they will have the most exposure to heat and liquid.

Slow cookers have different settings. When it comes to cooking meat, opt for the low setting whenever possible, especially when using tougher cuts of meat, which allows for tenderizing. Beans also prefer the low-slow method, but vegetable-based dishes can handle the higher setting with a reduced cook time.

Frozen meat should never be added to a slow cooker. Because of the nature of the “slow-cook” the internal temperature of the meat rises at a slower rate. As much as possible, you want to avoid having meat sit between temperatures of 40F-140F, as frozen meat can’t heat up fast enough. Frozen vegetables can be added if they are small or chopped, but will also increase the cook time. Whenever possible, use fresh food.

They say that every time you lift the lid of of your slow cooker you release enough heat to increase the cook time by 30 minutes. Resist the temptation. If you must check on the status of your dish, wait until you have at least reached the minimum cook time. Just relax and let it do its thing.

11. Add very tender vegetables toward the end of the cooking time

If you have very tender vegetables that you want to have hold their shape, add them closer to the end of the cook time. How-to: quickly lift the lid and slip them in for the last 30 to 45 minutes.

A small amount of liquid and a long cooking time mean that flavours will be deep, rich and highly concentrated. You can’t correct over-salting, so salt lightly and add more seasoning as needed toward the end of cooking

13. Avoid the “too much liquid” dilemma

If you end up with too much or too thin a liquid within your cooked dish, there is a fix for this. Remove the lid and continue cooking uncovered on high to help reduce the liquid level. If you have a large cut of meat, remove it to a platter to allow more surface area so your liquid can cook down.

And the hits just keep on coming! Slow-cooked meals are often better the next day — when all the flavours have had a chance to marry. Transfer your meal to a large dish (don’t store in the slow cooker liner because it retains heat for too long) and refrigerate overnight. Reheat the next day.

Instant Pot vs. slow cooker — which comes out ahead?