How I Learned To Love The Instant Pot

After refusing to buy one for years. 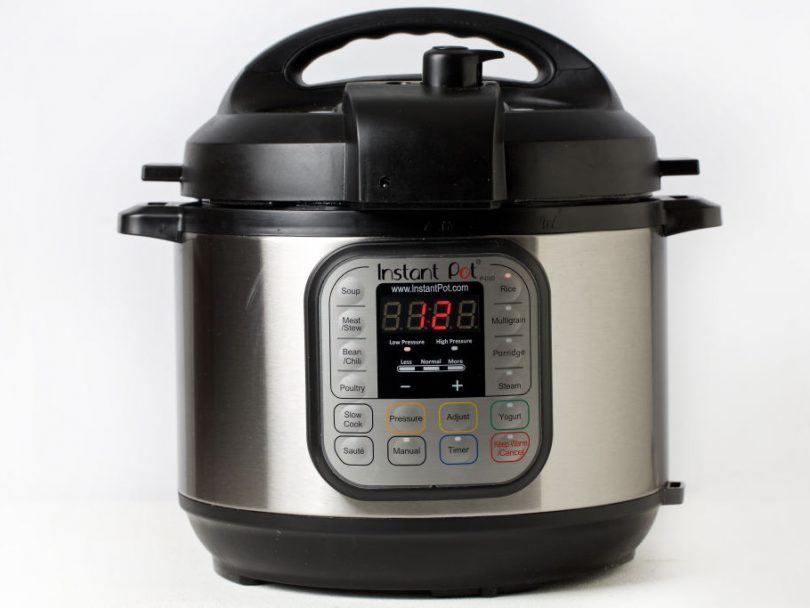 “Instant Pot? No thank you!” While everyone was waxing poetic about this nifty kitchen appliance when it rose to popularity in 2015, I had zero interest in it. A Chatelaine editor at the time, I had read all the press releases and knew the claims. It’s a pressure cooker! It sautés and steams! It will replace your rice maker and slow cooker! But I liked my rice maker and slow cooker. And what if I wanted to steam rice while chicken was cooking in the Instant Pot?

I watched as the test kitchen tried out the Instant Pot to see if it lived up to the claims. When they tested it against an actual pressure cooker to cook faux-tisserie chicken, and it lost, I felt victorious! But then it beat the rice cooker at its own game, turning out perfect brown rice in less time. It bested the slow cooker in the soup round, and the stovetop method for steel-cut oats after that. But despite these victories and our food editors’ high praise, I was still skeptical, convinced it was an over-hyped fad destined to fizzle out. For the next four years I happily lived an Instant Pot-free life, relying on my Dutch oven and slow-cooker for all my roasting, braising and simmering needs.

Then, one crisp Saturday afternoon in November, I decided to make bone broth for the first time—and to make it properly. As in simmer-for-24-hours-to-coax-out-all-the-goodness properly. Until then my soups and stocks only ever got an afternoon-long simmer—long enough to develop good flavour and allow the aroma to dissipate by bed time.

After loading up my slow cooker with a mountain of beef and chicken bones, aromatic vegetables, a splash of apple cider vinegar to draw out the bones’ nutrients, and enough water to fill up the bowl, I set it to simmer. For the first few hours, a thick wonderful, wonderful smell filled up the house. It felt like a cozy blanket on a cool fall evening.

By the next morning, that cozy smell was smothering the house—and me. I’d spent the night in a fitful sleep filled with dreams of swimming in beef broth, and my partner begged that I never, for the love of everything, make broth that way again.

Problem was, the broth was delicious; it was practically liquid gold. The flavour was rich and robust, with roasted notes from the bones and umami from the veg, and it developed a lovely gelatinous texture when it cooled—a sign all the coveted collagen had been pulled from the bones. I had to make it again. If only there was an appliance that could deliver the same result, in less time, while keeping my night’s sleep (and relationship) intact. I got my chance a month later, when my parents gifted me an Instant Pot for Christmas and my partner got hit with the flu.

Nothing comforts me more when I’m sick than a hot bowl of pho, but I’d never made it myself: I assumed it was impossible to replicate pho’s complexity at home without that 24-hour simmer. But what if I used my Instant Pot? Using its sauté function, I toasted the spices and browned the bones. Next, I deglazed the pot with a splash of water and added the remaining ingredients. After securing the lid and making sure all the pieces were in place, I set it to cook at high pressure for 40 minutes.

I had tempered expectations, to be honest. I wasn’t expecting it to be bad. I just didn’t think it would rival the pho at my favourite local. But I was wrong. Very wrong. That broth was the best thing to have ever come out of my kitchen.

The spices—star anise, whole cloves, cinnamon sticks, cardamom, coriander and pepper—were nuanced and cohesive. The broth was rich, sweet and salty with unmistakeable umami. I’d never achieved such complexity on my stovetop.

If this contraption I once maligned as an over-hyped kitchen fad could make pho this good, could it do the same for ramen? I had to find out. The ramen broth had the same rich depth, but what impressed me most was how meltingly tender the pork roast for the soup got after just 35 minutes; it fell apart as I was trying to take it out. The last time I’d cooked the same cut of meat in my slow cooker, it turned into a leathery lump.

After those big wins, and since my partner was still sick, I knew I had to try the bone broth recipe that set me on this path in the first place. With a stack of chicken spines, thyme, oregano, a vegetable mirepoix and a couple of hours, I made both a chicken bone broth that served as a base for a hearty, cold-busting chicken soup—all in my Instant Pot.

By this point I was enough of a convert to feel serious guilt for all the shade I’d thrown at this miracle appliance over the years. I’ve had my Instant Pot for just over a month, and already most of my cooking revolves around whether or not it can be made in the Pot. It’s replaced my oven for steaming beets and my stove for parboiling ribs. It allows me to make recipes that would normally take a few hours—Bolognese, butter chicken, galbi-jjim—in less than one.

I used to think this appliance would diminish what I find joyful about cooking. That it would keep me from learning new techniques, or bringing out the best in every ingredient I use. But the Instant Pot doesn’t detract from the act of cooking; it adds to it. Tough cuts of meat I normally shied away from no longer intimidate me. Laborious recipes reserved for special occasions are now part of my everyday repertoire. It’s reignited my willingness to step out of my comfort zone, and has become an indispensable tool in my kitchen arsenal. So to my former self I say: “Instant Pot? Yes way!”