Searching For My Grandfather's Memory In A Pickle Recipe

When a series of health issues turned my once-vibrant grandfather into someone I no longer knew, I kept his memory alive by making his signature half-sours. 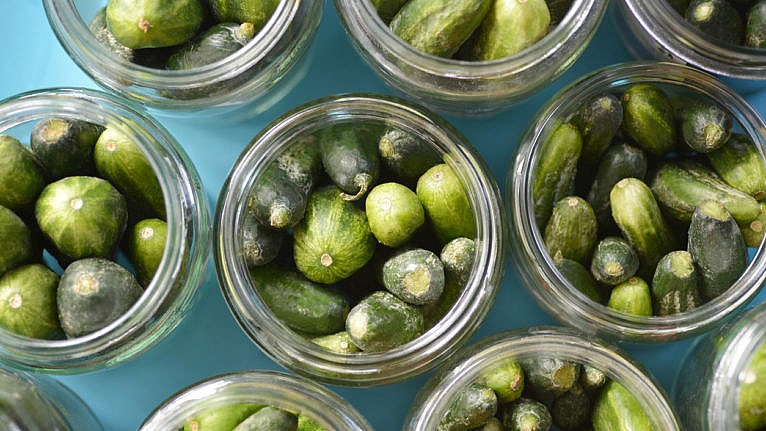 Some of my most cherished childhood memories include travelling from Montreal to my grandparents’ home in Ottawa for the Jewish high holidays each year. The dining room table would already be set when we arrived, laden with dishes of my grandfather’s famous pickles waiting for us. My grandfather—or papa, as I called him— knew they’d likely be gone by the time we sat down to eat.

It pleased him to know they were so irresistible we’d sneak a bunch before the meal had actually begun. They had a mild, garlicky, herby flavour, and they were never too salty or sour. Like the holidays, his pickles were a constant: a crunchy, comforting symbol of the customs I grew up with and believed would never change.

Unlike most men born in the late 1920s, my papa drew great satisfaction from cleaning and cooking for his family. His signature dishes were challah french toast, salmon salad, chopped egg and homemade half-sour pickles. These foods were my papa’s way of expressing love for his wife, his children, and later, his only grandchild. They represented the kind of person he was at his core: a man who was fulfilled and at his best when performing acts of service for the ones he loved.

But as he aged, that version of my papa began to disappear in a way that felt sudden and gradual all at once. As a result of unresolved trauma from his youth and a brain tumour that ultimately led to his death, at the age of 87 my papa began to struggle with chronic pain, anxiety and depression—all of which compounded to turn him into a man my family barely recognized. He rarely came to the phone when we called, and our visits gradually went from bringing a smile to his face to leaving him visibly unmoved. Whereas he was once curious about my personal life and writing aspirations, he became uninterested in conversing with us unless it had something to do with whatever he’d seen on Fox News that day. Our increasingly opposing political views made it more and more difficult to connect. I began to feel like I had lost my grandfather long before he was actually gone.

His constant headaches also made it more challenging, and eventually impossible, for him to continue his domestic habits. This inability to continue performing acts of service for his family, I believe, pained him more than any of us knew. The transformation was drastic and painful, and we were all left wondering what had happened to our family patriarch. The man I knew to be my papa was loving and affectionate. He painted my nails when I was little and exposed me to the arts, including what became my greatest passion: musical theatre. He struck up conversations with nearly every service industry worker he came across, his face beaming each time a new person reciprocated his desire for random connection. He devoted his career as a stockbroker to helping vulnerable, elderly widows—the same folks another broker may have chosen to take advantage of. 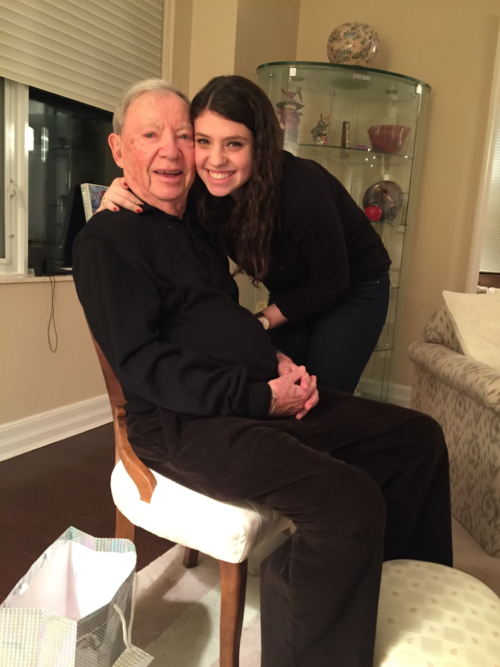 But as his multitude of health issues worsened, turning him into a shadow of his former self, my mom and aunt grew desperate enough to ask his doctor about the possibility of offering him an antidepressant. Though they believed he’d likely reject the idea, assuming his old-fashioned views about mental illness would prevent him from allowing himself to experience any relief, he shocked us all and jumped at the opportunity. His choice to go on SSRIs roughly six months before his death told us he longed to get back to his old self just as much as we longed to be with him. I typically don’t believe in “magic pills” without deeper personal work when it comes to mental health, but this medication genuinely returned my grandfather back to the man I had once known. He was filled with love and gratitude for his family, and he made sure we knew it right until the very end—a blessing for which I’ll forever be thankful.

Days before he passed in November 2021, when he was lying in his hospital bed without the ability to speak, my aunt and I remembered his pickles. We were both immediately overcome with regret for not asking for the recipe when we had the chance. We vowed to find a way to recreate them—to carry on his legacy and once again taste the flavours that we knew would remind us of the very best parts of him.

My papa’s pickles tasted unmistakably Jewish; much like the half-sour koshers you’d get as a complimentary side with your sandwich at the local deli. Unlike full sours, which are fermented for longer and have an unmistakably tart flavour, half-sours are mild and refreshing. My grandfather’s half-sours were particularly garlicky and crisp, but I didn’t know much about what went into making them other than that he used water instead of vinegar. Still, I was confident I’d know the taste of his pickles anywhere, and I believed trying to replicate his recipe would bring me closer to the man he was, helping me to let go of the person his mental and physical illnesses caused him to be.

This past May, I decided to give pickle-making a try for the first time. I found three separate half-sour recipes online and stocked up on ingredients at the grocery store before coming home and giving it my best shot. I put on a soundtrack for the occasion—Carousel, the 1945 Broadway musical that also happened to be Papa’s all-time favourite—and got to work.

Before I could even put a single cucumber into the first jar, the smells around me—the garlic, the cucumber, the salt, the spices—triggered this overwhelming feeling that he was there with me. They were the same aromas that filled my senses as my parents and I arrived at my grandparents’ home on the first night of Rosh Hashanah each year, a carefree time when I felt loved and safe.

The first recipe I chose called for coriander seeds, mustard seeds, black peppercorns, fresh dill, bay leaves, garlic, salt and water. Initially, it seemed unlikely that my papa used all these different ingredients in his recipe, but I gave the lengthy recipe a shot nonetheless. The second one was far simpler, requiring only water, salt, dill and garlic. The third called for water, salt, garlic and a pickling spice mix—which I couldn’t find at my local store, so I made my own. I filled each jar with the listed ingredients, stuck them in the fridge and, despite my impatience, committed to waiting the recommended minimum of four days before giving them a try.

And sure enough, when I bit into that first pickle from recipe number one days later, I was struck by how much it tasted like my childhood. The second and third were both too salty and bland to even compare, but that first recipe, with all its detail, came shockingly close. I felt foolish for initially underestimating how much time and effort he put into making his signature half-sours. Of course he went the extra mile. This was a man who travelled out to rural areas to meet the clients who couldn’t come to him, a man who brought his wife and daughters coffee every single morning without fail, who volunteered for crisis hotlines and dressed up as Santa Claus at a nursing home despite being as Jewish as they come. He went above and beyond until he quite literally could no longer do so.

I am determined to remember that version of him, to carry it with me throughout my life. Whether I’m pickling—or crunching on—a half-sour, jamming out to a Broadway cast album, or chatting with a waiter at a restaurant, I’ll remember all that he taught me and all that he was, because a life lived in service of others deserves to be remembered as such. And if I ever forget, my memory clouded by the not-so-happy years spawned by his illnesses, the familiar taste of his flavourful, irresistible pickles will surely remind me.