We Tried And Ranked 5 Types Of Gluten-Free Pasta

We tested five different brands for taste, texture and nutrition. 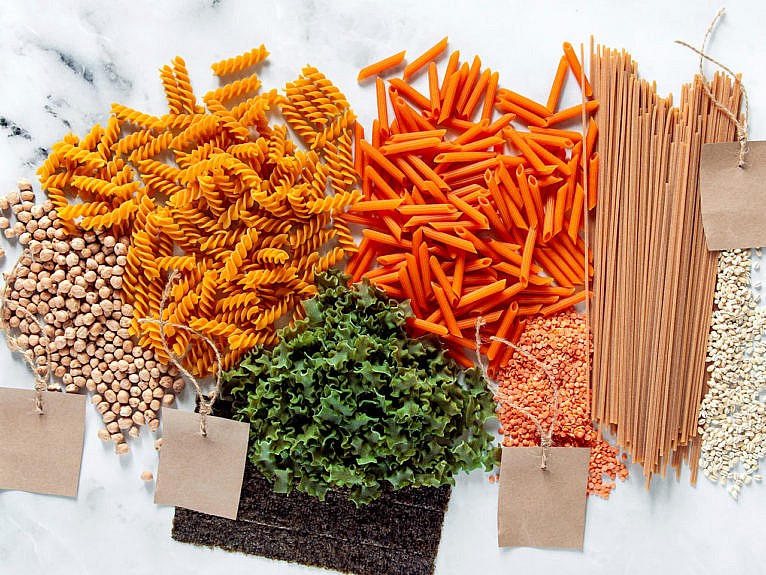 It can be difficult to find gluten-free products, especially if you’re a pasta lover. Gluten is a protein that is commonly found in wheat, spelt, barley and rye. Though it’s relatively easy to digest, people with dietary restrictions may want to steer clear, especially those with gluten sensitivity, wheat allergies and autoimmune celiac disease. If you are avoiding gluten for whatever reason, don’t worry—you can still enjoy a delicious bowl of pasta. We tested five different types of gluten-free pasta, ranking them by taste, texture and nutritional profile. Aside from the brands we tried, there are a wide variety of gluten-free options to pick from like buckwheat, edamame and mung bean. Read on for our findings.

How does gluten-free pasta compare nutritionally to traditional pasta?

Many gluten-free alternatives are higher in protein and fibre than regular white flour pasta. In fact, a cup of cooked chickpea pasta has almost double the amount of protein, coming in at 14 grams. Traditional white flour pasta has about 8g of protein per serving, which isn’t much if you’re only eating it with a simple sauce. Higher protein pasta comes in handy if you’re running low on time, but need a filling and simple meal. Compared to traditional white flour pasta, gluten-free brown rice or legume pasta may keep you fuller because they’re not made from simple carbohydrates that are quickly digested, says Ali Chernoff, a Vancouver-based registered dietitian. 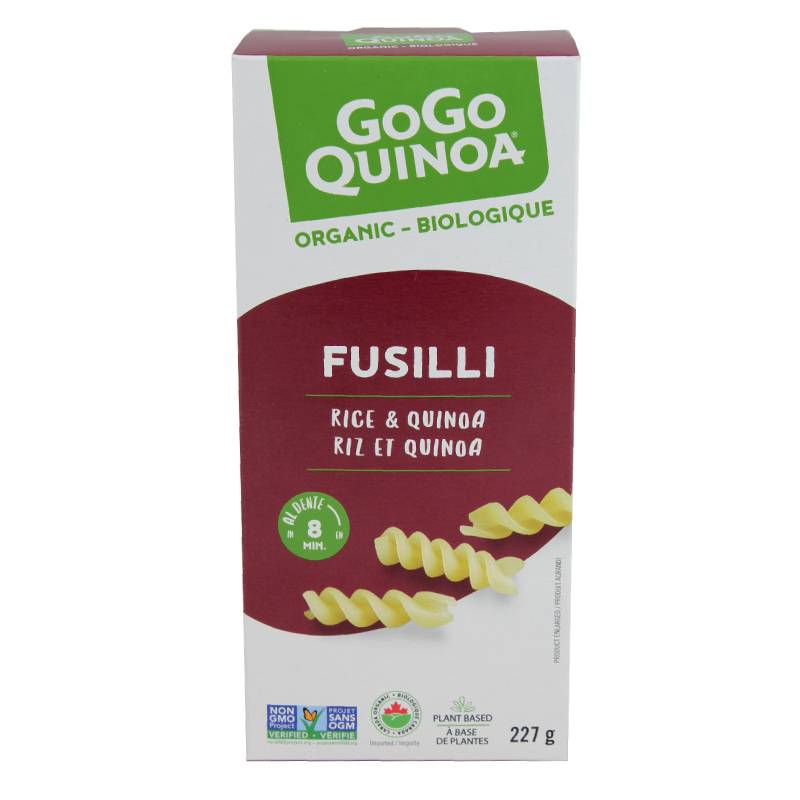 Taste: This pasta may have a tendency to disappoint quinoa lovers. GoGo Quinoa’s quinoa fusilli has a nutty flavour similar to the ancient grain itself, but there is a slightly bitter aftertaste. When cold, the pasta lacks density, while dissolving in your mouth right away when warm. Though the actual look and feel resemble regular pasta, the taste doesn’t quite match.

Texture: The texture of this pasta is different from other quinoa-based products because GoGo Quinoa combines white rice flour and quinoa flour together. Due to different milling processes, this brand seems to taste a bit more refined than traditional quinoa pasta but still feels gritty and grainy when chewing.

Nutrition: This particular brand doesn’t have a huge nutritional advantage compared to other common white rice and corn-based gluten-free pasta. There are only 3 grams of fibre per cup of this cooked quinoa pasta. It’s important to keep in mind that many variations of gluten-free pasta are not that high in fibre because the flour milling process takes out most of it, Chernoff mentions. “Brown rice and quinoa pasta may be similar in nutrition, but if you compare a bowl of brown rice and quinoa, quinoa has way more protein and fibre.” It’s best to look for pasta brands that are 100 percent quinoa flour or have quinoa as the only ingredient. 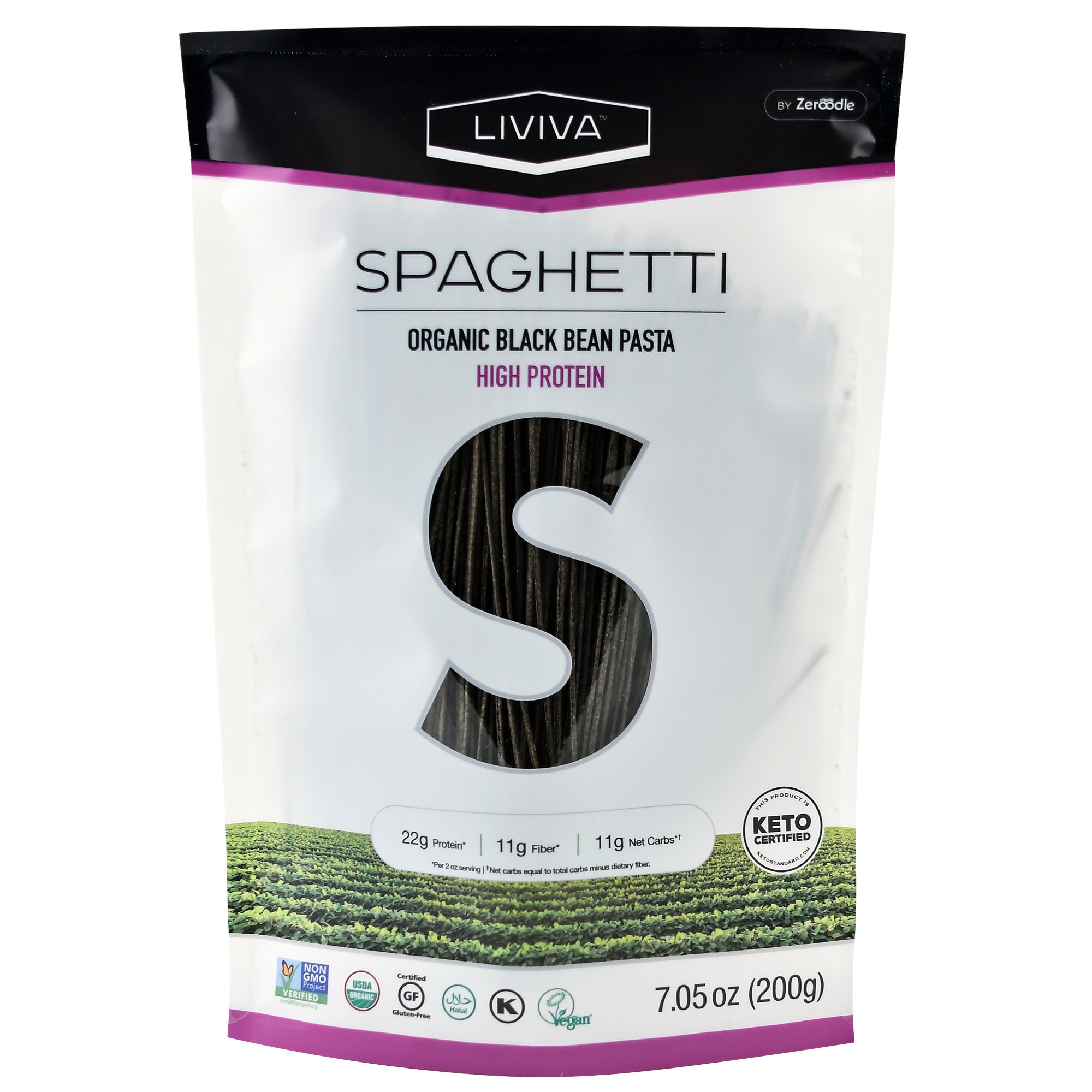 Taste: This pasta tastes like black beans disguised in the form of long spaghetti. The black bean taste is quite strong if you’re not prepared for it, especially because Liviva Foods doesn’t include any other flour mixtures in the pasta. Also, there is a slightly gummy taste.

Texture: Though similar in appearance to spaghetti, this pasta is much pastier and thicker. It is extremely chewy if not cooked properly. When boiled fresh, it has a tendency to stick together. After cooling down, the pasta separates and becomes closer to regular spaghetti.

Nutrition: In terms of nutrients, black bean spaghetti allows for a more balanced meal than a regular bowl of white pasta. Rather than eating an entire bowl that consists of an overwhelming taste of black beans, it can be helpful to include other satisfying food groups. According to Chernoff, “the key is to start with a nutrient-packed pasta and then build on that by adding vegetables, meat, or meat alternatives to make a balanced meal in one bowl.” 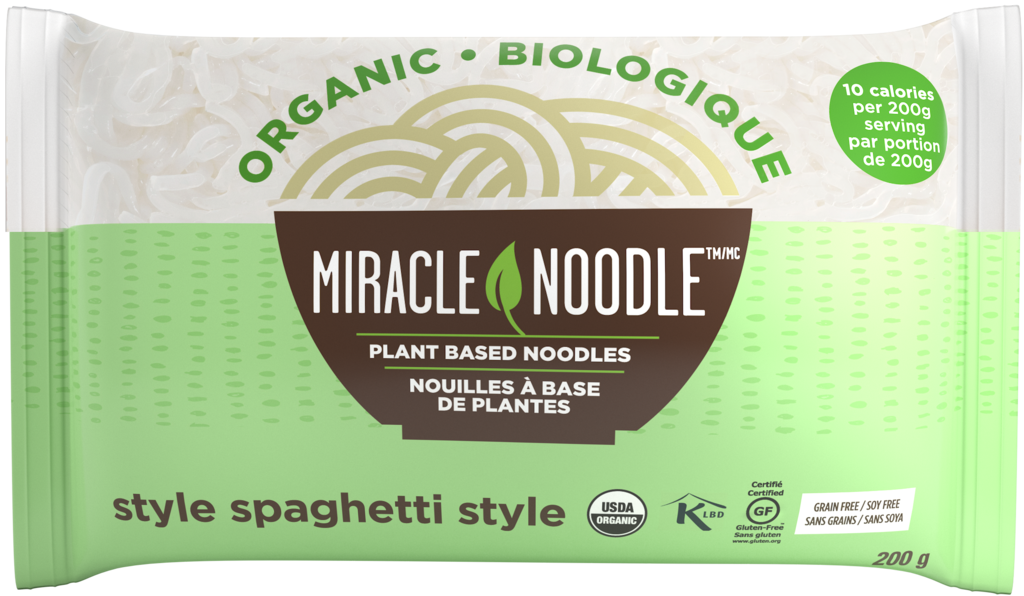 Taste: If not rinsed thoroughly and heavily sauced, these noodles taste extremely fishy and bland. They’re somewhat slimy and spongy, but not overbearingly so if properly tossed with spices because they soak up other flavours like a sponge.

Texture: The texture of shirataki noodles resembles a mixture of seaweed noodles and glass noodles. They have a squishy, gelatinous texture when warm and cooked. However, the noodles can become crispier when pan-fried and excess water is drained, creating a fantastic crunchy noodle topping. Miracle Noodle has angel hair or fettuccine textures that may resonate better with you.

Nutrition: This pasta is great for low-carb lovers, those following a Ketogenic diet, or anyone who enjoys trying new pasta. Shirataki noodles are made from organic konjac flour, a starchy root plant grown in Asia. These noodles are rich in dietary fibre and only have 10 calories for the entire package, but lack vital nutrients that can only come from whole grains. Chernoff suggests mixing shirataki noodles with regular brown rice pasta to get those essential vitamins and nutrients from grains. 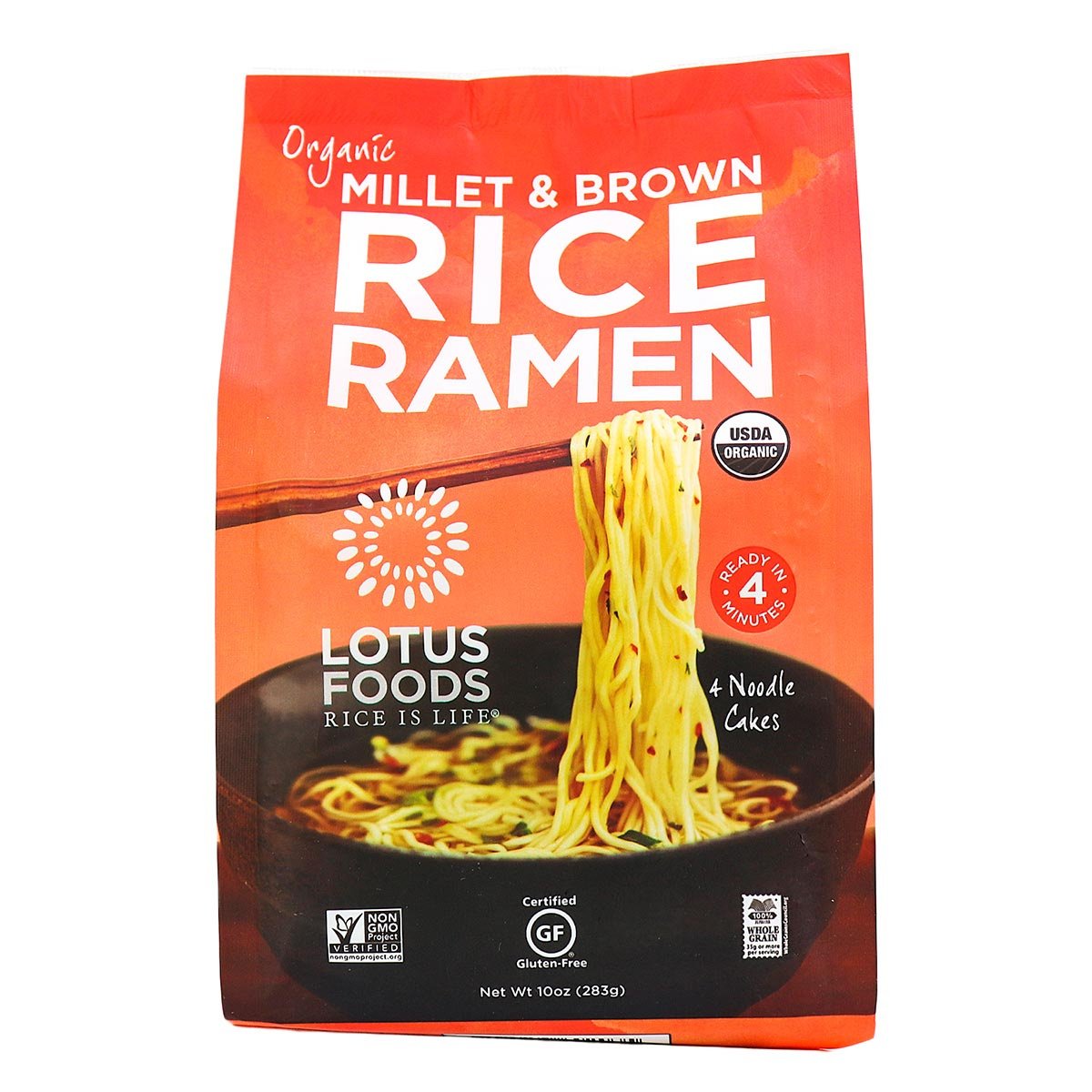 Taste: These are very similar to original ramen noodles and they’re great for stir fry, soup or even just by themselves. When warm, they taste fluffy and are quite satisfying to slurp down. When they’re cooler, the noodles become heavier and retain more body, which might work nicely in a salad. Lotus Foods has a variety of gluten-free rice-based pasta, but this one definitely reminded me of going to a local ramen shop.

Texture: The texture of these noodles is soft, springy and light. They’re simple to mix together or eat by themselves. If they’re too long, you can cut them into smaller pieces or swirl them around your fork. Be careful not to overcook them or you’ll end up with stiff hair-like pasta.

Nutrition: Lotus Foods packages noodles similar to traditional two-minute ramen, but with 4g of protein and a lower amount of calories. “Though all rice products break down to the same sugar molecule, brown rice pasta starts with fibre and other vitamins that you don’t get from white rice pasta,” Chernoff explains. If you absolutely can’t stand the taste of brown rice pasta, she suggests combining white rice or potato-based pasta with the brown rice option. 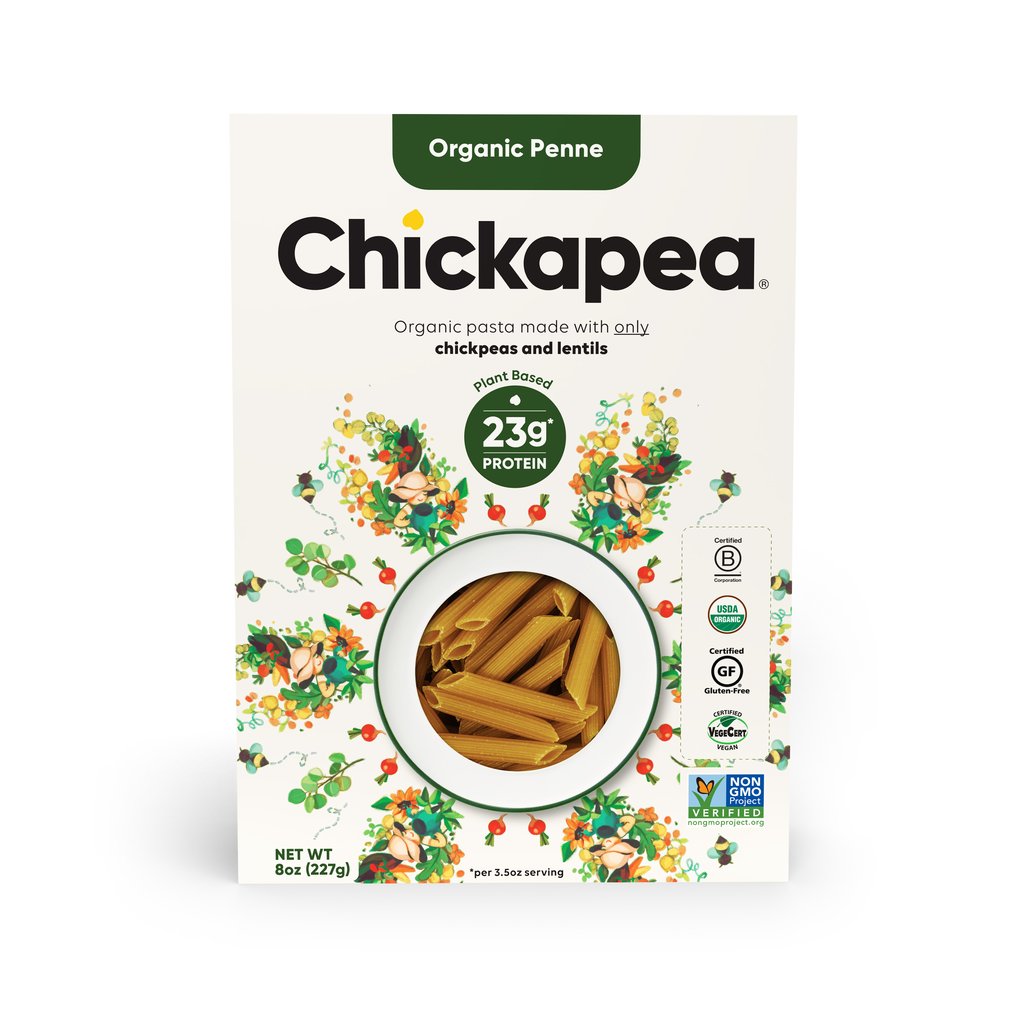 Taste: Chickpea pasta has a nutty aftertaste that isn’t too strong and can be masked well with your favourite pasta sauce. Chickapea’s chickpea penne has a mix of red and yellow lentil flour in it, producing a more mild flavour. If you’re not the biggest fan of legumes, this is a good option for you—it barely tastes like raw chickpeas. Be warned though, it does take a bit more effort to chew than white flour pasta.

Texture: This pasta is definitely ranked the closest to the ridged, bouncy, white penne that you probably grew up eating. When warm, the pasta is airy and light. When cold, it feels dense, hard and almost undercooked. Though it doesn’t take long to boil, you have to be careful not to overcook it. If you do, not only will it turn to mush, it will probably leave your pot starchy and pasty too.

Nutrition: As mentioned, legume-based pasta is packed with protein and fibre. According to Chernoff, they are the most nutritious gluten-free pasta. When it comes to traditional white flour pasta, “it’s so easy to overeat because the simple carbohydrate turns into blood sugar fast. This type of flour is missing the fibre that slows down the carbohydrate from turning into blood sugar quickly,” she says. Everyone can benefit from incorporating more fibre into their meals—even if you’re not following a specific gluten-free diet.