I Tried A Pizza Subscription Service 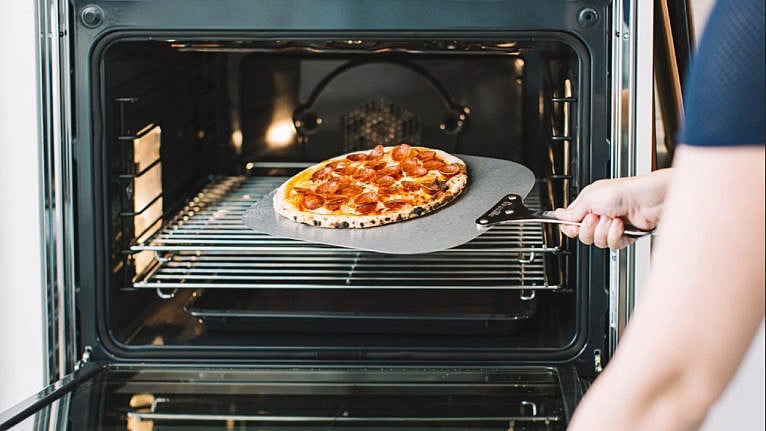 In my mind, there are only three types of pizza worth paying money for, each suited to a particular scenario. There’s the thick-crusted Sicilian kind, with an almost deep-fried quality to the dough, topped thick with tomato and cheese, easy to reheat and therefore delivery-friendly. There’s the thin, cracker-like pizzas that prepared food brands like Dr. Oetker’s have recreated in frozen form so well (their pizza spinaci is a god-tier snack; I will brook no argument about this). And then there’s the charred-and-chewy crust of Neapolitan style pizza, best achieved with a high-heat oven and eaten fresh, which is why I rarely order them for delivery; there’s no way to reheat them to that straight-out-of-the-oven perfection..

So when Toronto’s General Assembly launched what it calls “the world’s first pizza subscription” back in September, I was intrigued. The fast-casual pizza chain had already been making frozen versions of its wood-fired-style pizzas available to Ontario grocers since the spring. Now it was offering them as a regular home delivery kit of partially cooked frozen pizzas to throw into an oven on a minute’s notice and be ready in just a few minutes. I tried a monthly box to see if their claims checked out.

I should state upfront: the subscription program is only available in Toronto right now, with a rollout plan for the wider GTA (“M” postal code cities), London and Ottawa scheduled for early 2021. The company plans to deliver nationally by the end of next year. I’ll also state upfront that there are a lot of good reasons to look forward to it launching wherever you live—depending on your delivery habits when it comes to pizza.

Starting, for example, with frequency. The subscription service delivers 4, 6, 8, or 10 pizzas per month from a menu of six options, four of which are vegetarian and one plant-based. You can change the amounts and types of pizza from month to month and skip deliveries when you like, but the options themselves are set and not customizable. A pizza feeds about a person each, and depending on volume, costs $9 to $9.75 per pie, significantly less than what you’d spend ordering the same type of pizza pre-cooked. Their delivery is contactless and traced, meaning you’ll get a text notification the day of what time they’ll be dropped off. Each pizza is packaged in vacuum-sealed plastic and stackable: a set of eight easily fit in my smaller-than-standard freezer with the rest of my bags of frozen vegetables and tubs of leftovers.

Their freezer life is about 60 days, which means if pizza night isn’t a common occurrence in your household, you’re probably better off with a low-frequency delivery or picking up a few frozen pies from a local retailer that carries them. Otherwise, they’re enormously convenient: on three separate evenings over the past month, I fired up my stove’s oven, toaster oven and portable gas oven to 500 degrees (or 450, in the case of the stove oven) to test them out. Each time they cooked up in barely enough time to get the table set, with more or less consistent results: a chewy, blistery pizza with a crust that didn’t get soggy in the middle of the pie. This can be attributed to GA’s method of partially cooking the dough before dressing and freezing the pizzas. It also means you need to watch them while they cook: a minute too long in the oven can dramatically change their texture.

Each cooking method had its benefits. While cooking them in the stove’s oven was the only way to ensure multiple pizzas came out cooked at exactly the same time, the toaster oven was best for precision: I was able to switch from baking them at 450 degrees to a broil for the last 30 seconds to really make the cheese bubble. The blistering heat of the portable oven got the closest to that straight-out-of-a-Neapolitan-style-oven flavour, but only cooked one pizza at a time. In all cases, the toppings were sliced thin enough to come out properly cooked: crisp and salty pepperoni, just-softened mushrooms, jalapeño peppers that still retained a bit of crunch.

Either way, General Assembly’s convenience and price got enough pizza and salad on the table for two adults and a toddler in less than 15 minutes, and for less than $25. For a style of pie that simply isn’t as good when delivered, it’s a great price and product. I’d absolutely order from them again once their waitlist opens up, though perhaps at a tempered frequency of about one pizza night a month, two max. There’s still times I want the bready tear of a thick-crust pizza, or Dr. Oetker’s cracker crunch—and in my home, there’s room for all three.