How Urban Garden-Spotting Helped Me Reconnect With My Chinese Heritage

I started seeking out Chinese vegetable gardens downtown Toronto backyards as an early-pandemic activity; soon, I couldn't stop. I love their visibility, their audacity, and the traditions they represent. 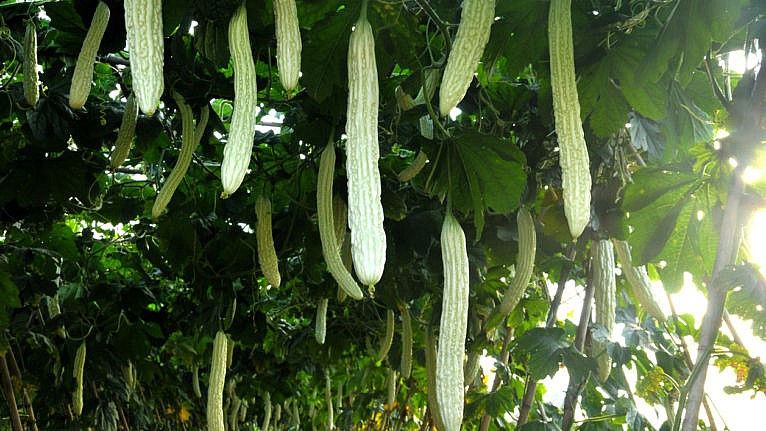 Having grown up in a small Alberta town with few other Chinese people in it, I love my adopted home of Toronto. I love its diversity, shown in the people who walk its streets and in its restaurants, which feature an abundance of cuisines varied in their regionality. Here, it’s not just Chinese food but food from Anhui, Chiuchow, Guilin and Shandong; not just Indian food, but food from Gujarat, Tamil Nadu and Kerala.

In recent years, I’ve found myself more fully embracing my Chinese identity and heritage. The better I know myself—relishing lessons learned in the context of a Cantonese language class and wanting, seemingly out of the blue, to buy myself a cleaver, the versatile Chinese equivalent of a Western chef’s knife—the more I realize how outsized a role identity and heritage play in who I am. And the more my partner, also the child of immigrants, encourages me to seek out food, experiences and pop culture that speak to the Chinese side of me, the more I do it, to heartening results.

But I’d be lying if I said all of my recent efforts to connect to my culture weren’t also about my parents. I miss them like crazy. They still live in Rocky Mountain House, Alta., the town where I was born, and for almost two years during the pandemic I didn’t see them.

My parents are in their 80s and 90s, and my dad, a long-term diabetic, the family cook and hub of the family wheel, is currently on dialysis and may never be able to visit me in Toronto again. I’m writing a book largely about him. I’m trying to understand what his life was like at various stages, but he’s not one for the phone, so I’m left to learn about him and people like him in oblique ways. I spent the pandemic calling and texting my mom and having her ask my dad which ingredients and techniques to use for this or that Cantonese dish. I read Chinese food blogs, watched Hong Kong food videos on YouTube, and joined Facebook groups for people from Hoisan, the county from which my father, and scores of other Chinese immigrants, hail. Before moving to Canada in 1951, he was a farmer. Many people from Hoisan and its neighbouring counties were before they left, and you can tell that the cultivation of food is still on the minds of many in the diaspora.

My obsession with vegetable gardens began innocuously enough. I’m immunocompromised due to medications I’m taking, so my partner and I stopped using public transit when the pandemic began. We’re adventurous people. We love nothing more than trying new types of food far from the city centre. But without transit and without a car, we began to have adventures on foot.

An early favourite garden I first saw many years ago and would visit when I could is in Kensington Market in downtown Toronto. It’s on a corner lot, and on or around its mighty, makeshift trellises it grows enough food for multiple families. Bird’s eye chilis, four types of Asian melons (some grazing the tops of the vehicles in their carport), vegetables I did not know at the time were amaranth, Malabar spinach, garlic, and sweet potato. More easily recognizable crops like pumpkins, leeks, cucumbers, tomatoes, and raspberries.

There’s something at once enlivening and discombobulating about seeing fruits and vegetables grow. At the grocery store, it’s easy to forget about how produce items come into the world. In a garden, it’s impossible to ignore.

Sometimes while visiting that Kensington Market plot, I saw an older Chinese woman splashing water at the base of the plants. I used to think her garden was novel and rare. But plots like hers are like luxury cars: things you notice everywhere once your eye is trained to seek them out. A recent study out of Dalhousie University found that just over half of respondents both nationwide and in Ontario grew at least one kind of fruit or vegetable in a garden, and that these numbers had grown during the pandemic. My partner and I saw gardens in every type of location: on apartment balconies, on the tops of sheds, in pits in front of high-rises, in front yards and backyards, and in parks along hydro corridors. From the kinds of vegetables, the decorations on the houses, and the people tending the gardens, it seems over half of the more than 2,000 we’ve spotted and recorded belong to Asians.

Many times, if we stopped to take a look at a garden and the person it belonged to saw us, they’d approach if they were Chinese. This would unnerve me slightly because, while Cantonese was my first language, it’s mostly lost to disuse and time.

I’m a shy person. I rarely even talk to my English-speaking neighbours. But at the edges of gardens, emboldened by the presence of my partner and in search of a cultural connection, I speak anyway. We don’t say much; maybe I tell them my last name and ask them if they’re from Hoisan or Hoiping like my dad and grandmother. I ask what they are growing, and I tell them their garden is beautiful and that it takes an impressive amount of work and skill to grow so much. Maybe they demur, say it’s no big deal. Often, we smile broadly at each other. Maybe I’m a stand-in for someone they miss, too.

I might say my Chinese isn’t very good to save myself the heartache of hearing it from them—my experience with Chinese elders is that they usually speak their minds in an unvarnished way—but kind replies are surprisingly the norm. “You speak it,” they might say. “That’s the important thing.” Or: “Your Chinese is actually pretty good.” Sometimes well-choreographed scenes of generosity and humility typical of our culture will ensue with them trying to give us vegetables and us refusing, not wanting to impose, and either standing our ground or eventually accepting the food with profuse thanks and well-wishing. Eventually, my partner and I leave, my heart full. These gardeners and I may not say much, but I can’t tell you how much these interactions mean to me.

Some things I love about Chinese gardens are their visibility, their audacity, the industriousness with which they repurpose disused items. I love the way these gardens dispense with Western notions of aesthetics. Don’t get me wrong: I love flowers and landscaping, love ground cover and hedges and ornamental trees. But give me the character of a front-yard Asian veggie garden any day. Give me the crop of watercress growing in a kiddie pool, the Chinese melon vines growing out of a pizza box or rice bag or tire, or on a swing set or six-foot–tall trellis made of broom handles, old piping, and hockey sticks. Give me messy emblems of my culture in an era of Asian pride and defiant displays of life thriving in spite of the growing anti-Asian sentiment. Give me the past written onto the present, a beautiful and telling contrast to the increasing gentrification of my city.

Walking home sometimes after garden excursions, I chat excitedly with my partner about the day’s highlights and memories we’ve accrued over the years, sometimes with kind gifts of vegetables—maybe a fuzzy melon, some amaranth, or some chayote—nestled in one of our bags. We cycle through the various options of how to prepare them: the ways the gardeners say they use them, recipes I’ve seen online written by Chinese home cooks, memories of one or another of my dad’s dishes, my own impulses formed from decades of learning and global influences as a third-culture kid. I know I have choices to make, but the results are usually delicious. Later on, after eliciting my mother’s pride telling her about how I made fast friends with a Chinese senior citizen, I may ask for the Cantonese name for pumpkin or if she or my dad have ever eaten stir-fried cucumbers, a preferred method of preparation of one especially kind woman we met two years ago, the first gardener to try to give us any of her wares. My parents live far from me, but with any luck, time on the phone with them and, unpredictably, time spent with gardening strangers will keep my culture singing through me.