This Twist on Dalgona Coffee Can Be Any Flavour You Want

This method offers all the dreamy whipped texture of the original TikTok-famous drink with far more possibilities—but it takes a little elbow grease. 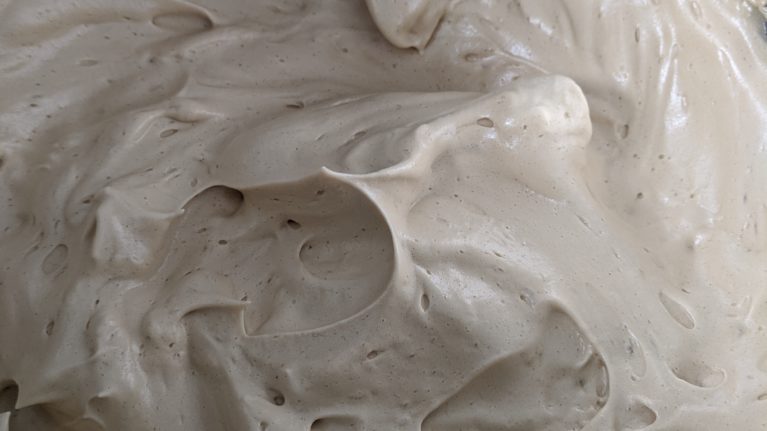 The first time I tried Dalgona coffee, the whipped beverage phenomenon that’s taken over the Internet in these past few weeks, I made it on a Monday after my post-work commute from the living room area to the kitchen. I had all the necessary ingredients: instant coffee, sugar, water and a whisk. No wonder it’s so popular: it was easy to make, and looked so nice! Thick, caramel clouds of fluff just floating on top of my glass of hot milk.

And at about two tablespoons of Folgers Instant, it also had an insane amount of caffeine in it—a teaspoon alone makes a single cup. This did not sit well with my otherwise caffeine-agnostic body. Usually, I can have a big coffee well after dinner; I didn’t fall asleep till past two in the morning that night.

What should’ve happened next was I’d wake up tired the next morning and return to my regular espresso-based caffeine fix. Instead, I ended up trying four different dalgona variations over the next week: with whipped cream (too rich), with regular espresso and sugar (didn’t work), and with aquafaba, which tasted like salted chickpeas and coffee and was absolutely disgusting. Convinced that the processed nature of instant coffee was what made the drink whip up so well, I also tried the method on this brand of freeze-dried instant ginger drink I like; it just turned into a puddle of honey soup.

I did all this because I wanted a homemade version of a whipped coffee that didn’t rocket-fuel me into the early hours of the morning, and probably a little bit because at week five of quarantine, I’m starting to go nuts.

When it comes to dalgona-recipe-fiddling as the outlet for pent-up quarantine anxiety, it turns out I’m not the only one. In looking for established alternatives to making a whipped coffee at home (did you know this drink has decades-long histories in Libya, India, Greece and Macau?) I came across a recipe from Australian culture site Broadsheet that looked promising. The author, who cycled through every method I tried and more—chemical emulsifiers and stabilizers get involved at one point—eventually landed on using Italian meringue as a method of whipping espresso into those lovely, creamy clouds.

Italian meringue is a little different from its French and Swiss counterparts in that it relies on pouring hot sugar syrup into egg whites while they’re being whipped. This gently pasteurizes the eggs, making them more stable than French meringue but still lighter in texture than Swiss.

The recipe, which you can find here, involves two components: boiling 4 ounces of strong espresso or coffee and half a cup of sugar into a simple syrup, then pouring that syrup into two egg whites halfway through the process of whipping them into stiff peaks. The egg whites should be whipped with a bit of lemon juice or cream of tartar, and be at medium-peak stage by the time you pour the syrup in in a slow, consistent stream. The result is a glossy, latte-hued whip that’s denser than the dalgona version; it’s almost like eating coffee marshmallows. After all those failed experiments, of course I tried it. Here’s how it turned out for me: 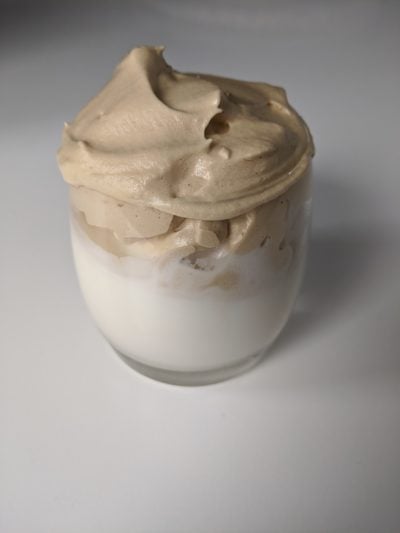 Was it anywhere near as convenient as the original recipe? Absolutely not: this multi-step (and multi-pot) method isn’t most people’s idea of a fun way to make coffee, not to mention the fact that you need an electric egg beater or kitchen mixer to make this work. In its defence, though, it is deeply delicious, fridge-stable (you can keep the whip in the fridge for future coffees for a couple of days), and far more adaptable: since it isn’t the coffee that’s making this foam work, you can flavour the sugar syrup however you like before making the meringue. Mint? Cardamom? Cocoa? So many options that don’t involve instant coffee—or caffeine.