Homesick For My Grandma’s Cooking, I Took Matters Into My Own Hands

When I realized that I had no idea how to make any of the dishes I grew up eating, I knew it was time to get a cooking lesson. 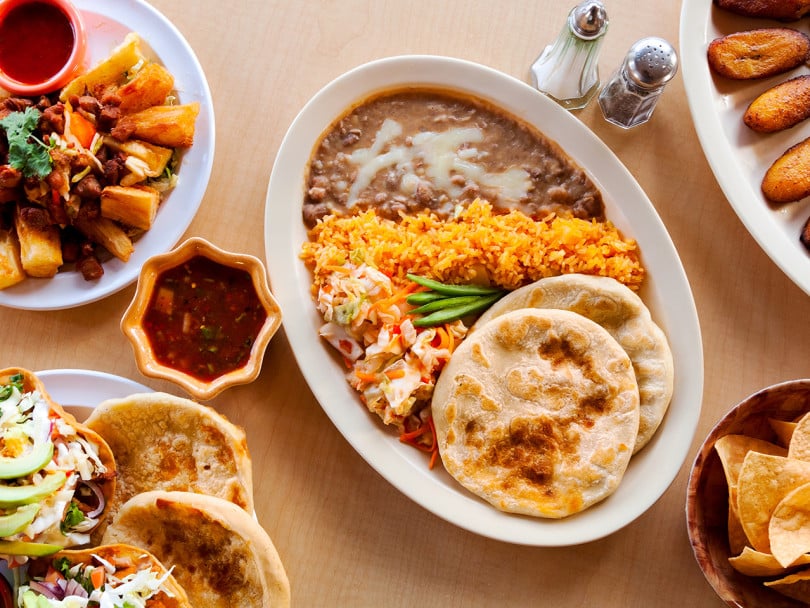 It’s Saturday morning at my parents’ house in Brampton, Ont. and I’ve been woken up by the smell of refried beans. I check the time—7 a.m.—and realize I’ve overslept by half an hour. (My abuela and mom had planned to start our full day of cooking at 6:30 a.m.) I quickly get dressed and head down to the kitchen, where they’ve started to prep food without me. The dry beans have been rinsed, boiled and puréed, and there are bowls of chopped cabbage, peppers, onion and carrots neatly lined up on the counter.

“Emily, you know the beans take time to harden up,” says my mom, pointing to my abuela (or Tita as I affectionately nicknamed her when I was younger), who’s at the stove stirring the blended beans in a pan. 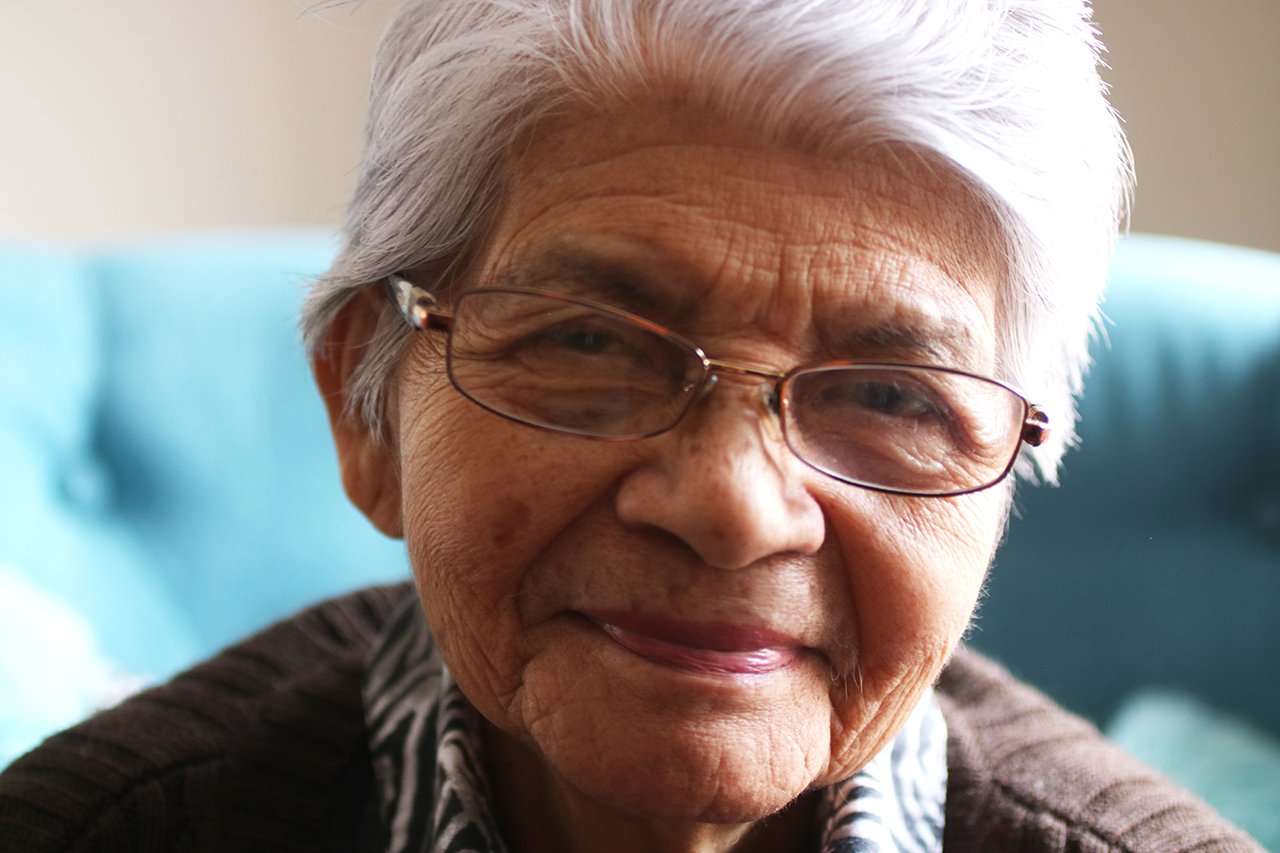 Looking around the kitchen, still sleepy, I realize we have a long morning ahead of us. This isn’t just any regular visit to my parents’ house—I’m here because I’m determined to learn how to make my Salvadoran culture’s national dish, the pupusa.

Pupusas are stuffed flatbreads—something like arepas or tortillas. Traditionally, they’re filled with your choice of cheese, pork or beans (or a combination), and served with a side of tomato sauce and curtido, a vinegary slaw. Flat and round in shape and slightly crispy at the edges, they’re best hot off the stove so that the contents ooze out like molten lava. Salvadorans will eat them for breakfast, lunch and dinner, and every other occasion you can think of, including having friends over and going out. These little pockets of deliciousness taste like home to me, so it’s only fitting that today, I’m prepping them with my mom and grandma for a hearty brunch.

It wasn’t until I moved out of my parents’ house that I realized how much I longed for my culture’s food. Suddenly, there were no beans on the stove when I would come home from work. No sopa de pata (a hearty Salvadoran soup made with cow’s feet, tripe, yucca, corn and spices). And definitely no pupusas on the weekend. Being so out of reach from these flavours made me feel homesick. Even worse, I felt alone—more than I ever had before. These foods were synonymous with comfort, and I had taken them for granted. When I realized that I had no idea how to make any of the dishes I grew up eating, I knew it was time to get a cooking lesson.

I’m put on bean duty; constantly stirring the beans in the pan so they don’t burn. Meanwhile, Tita is preparing the curtido, dumping cabbage, carrots and onion into a pot of boiling water. The pot must weigh 15 pounds with all that water, but at just four-foot-eight, Tita carries it over to the sink to strain it like it’s nobody’s business. “Do you need help?” I ask in Spanish. “You just keep stirring all the way to the bottom of the pan so the beans don’t stick,” she says back to me in Spanish, the only language we communicate in. 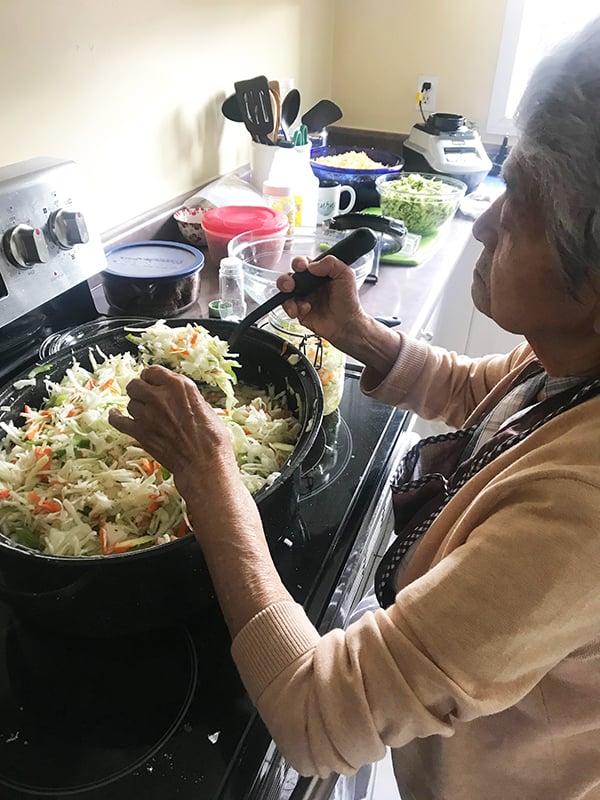 At 8 a.m. the beans are finally done. Tita decides that it’s time for music and pulls out her favourite CD to cook to: a ’70s Spanish ballads mix that mainly features ranchera singer Rocío Dúrcal. (“Amor Eterno” is her favourite song.)

Tita is usually soft-spoken and keeps to herself; in the kitchen, however, she isn’t afraid to belt every lyric (and she knows all of them) aloud. My mom, who isn’t so soft-spoken, knows them too and joins in at the chorus at the top of her lungs. Now that the beans—one of three pupusa stuffings—are done, we move onto the second stuffing. We grate zucchini, mozzarella and cheddar cheese and mix it into one bowl. “So how many cups of zucchini and how many cups of grated cheese?” I ask Tita.

“Ay niña,” she says. “Just eyeball it.” Measuring cups do not exist in her kitchen.

Growing up, I never gave much thought to cooking. Meals in the house appeared in the form of a feast on the table at breakfast, lunch and dinner. Later, in my teens, I started becoming more interested in what was happening in the kitchen and watched as Tita or my mom would prep a traditional dish, but never really learned how to do anything. Up until now, I hadn’t really ever cooked with them—and it took making these pupusas to get all three of us in the kitchen at the same time.

Our third pupusa stuffing is chicharrón, a mix of ground fried pork belly, onion and veggies. Luckily, I had pre-prepared it with a family friend the week before and froze it to preserve its freshness—making it is a tedious, multi-step, time-consuming process that took us five hours. With the pupusa stuffing contents each separated into their own bowl, Tita starts preparing the masa—corn flour mixed with water that’s used as the pupusa dough.

My mom is eager to move onto the next step—assembling the full pupusa—since she never fully mastered how to do it. Tita takes a palm-sized amount of the masa­—pizza dough-like but grainier to the touch—and continues to roll it in her palm until it becomes a sphere. Then, she flattens it out and creates a well in the middle that will house the stuffing. From there, she grabs the outer edges to close it up at the top like a dumpling and starts flattening and rounding it out again. With a perfectly circular pupusa in the palm of her hand, she slaps it right down on the pan that’s on the stove and it starts to sizzle. She makes it look so easy.

“Where did you learn how to make pupusas?” I ask Tita.

“Down at the church’s kitchen,” she tells me.

“You mean you learned how to make them IN CANADA?!” I say in shock.

It makes sense once I think about it. Salvadorans who came to Canada as refugees to escape the civil war (just like my parents did) needed to find ways to preserve their traditions in their new home. For many, this was done through food. When my parents first arrived, they stayed with my dad’s uncle. With the guidance of his uncle’s wife, my mom made her first pupusa. Shortly after my birth, Tita came to Canada and took over as the primary household cook as my parents worked long hours—sometimes six days of the week. I grew up eating her food and my introduction to Salvadoran dishes were all through her.

My mom and I finally try our hand at making one. Somehow hers come out perfectly on the first try, but it takes me about four times to finally get it right. Tita moves on to making the curtido and the sauce, leaving my mom and I to finish up the pupusas. It’s 11 a.m. and I’m exhausted by the time I get to making my 10th one but feel good that I’m not that far behind my mom, who has only made a couple more than me. 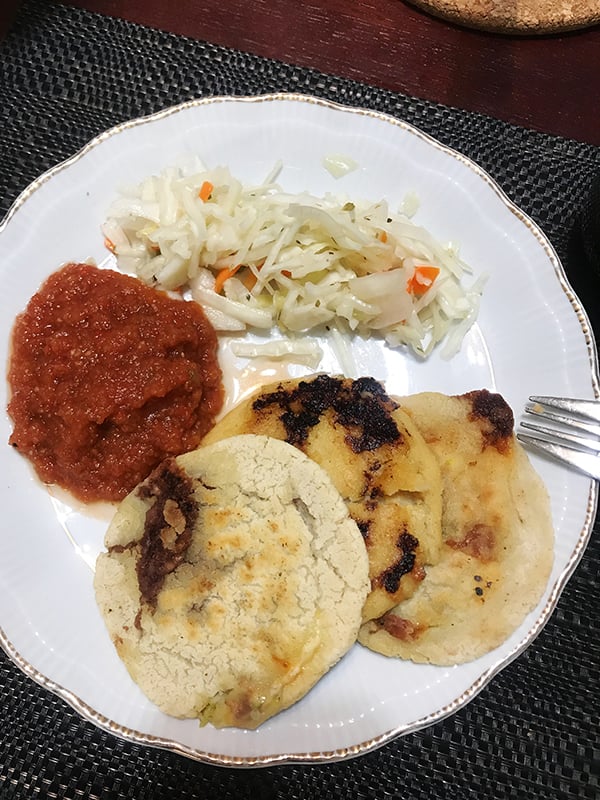 Thankfully my two sisters and my dad come downstairs to the kitchen just in time to eat—I don’t think I can muster up the energy to make any more. As my dad takes the first bite of his, he sends a huge smile my way and I see a gleam of pride in his eyes. Could it be that I’ve finally mastered the art of the pupusa?

To be sure, I invite some friends over for dinner a week later. A few hours before my guests arrive, I lay out all the ingredients on the kitchen counter. But nervousness comes over me. How could I possibly make a pupusa dinner all on my own without Tita? As I look down at the pupusa components I had pre-prepped at my parents’ home, I know what I need to do. I blast “Amor Eterno” throughout my apartment, roll up my sleeves and get cooking. My pupusas come out looking nothing like Tita’s: they’re far from being perfectly circular, some don’t have enough stuffing and others are a little burnt. While I already know my grandma would have some pointers for me if she’d seen them, to me, they’re perfect. This is just the start of what I hope will become a lifelong tradition of making Salvadoran food and my only hope is that one day I’ll be a pro, just like Tita.