Ask No Questions About Samosas

I don’t know why my mother balked against recipes. The fact that I managed to absorb the way she makes pakoras and samosas at all is a minor miracle. 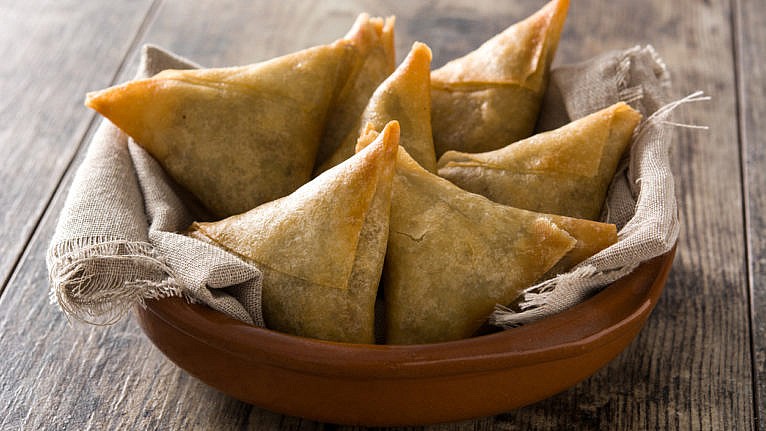 Almost every culture has their own version of the esteemed dumpling. The freshly released anthology What We Talk About When We Talk About Dumplings collects tales and recipes about the ubiquitous food from around the world. In this excerpt, Angela Misri chronicles her childhood quest to learn her mothers cooking and rewards us with two hard-earned recipes for veggie samosas and onion pakoras.

The kitchen in my childhood home in Calgary was not a shared space. It was ruled by a maharanee who hated to be questioned. Unfortunately for her, she had sired a ridiculously curious child who not only questioned everything, but also cast doubt on recipes that had been passed down through generations, like a crazed toddler in a sweet shop.

That kitchen was the arena where I learned my mother’s/ her mother’s/her mother’s mother’s way of making pakoras and samosas.

The instruction would start in much the same way.

Angie: What are you making, Mom?
Mom: Pakoras. Go do your homework.
Angie: Why?
Mom: We have people coming over on Saturday.
Angie: Can I watch?
Mom: No.
Angie: Can I sit here?
Mom: (Dramatic sigh, hands moving, mashing, folding, and then finally) No questions.

My mom was the youngest child in a family of six siblings in Srinagar, Kashmir. Her only sister (my masi) was married at age fourteen when my mom was five or six, which meant she grew up as the focus of the feminine energy of her mother – the only person in the household to pass on the feminine arts. My nani was in a hurry. Mom had to be married off at sixteen because her mother was a widow. My nani was terrified that she would die and leave her young daughter at the mercy of her brothers (a weird logic, if you ask me, since she instead handed her daughter to a family she barely knew).

I bring up this family dynamic because I can’t imagine that my nani’s kitchen was anywhere near as adversarial as my mother’s, both because my mother actually gets along with people and questions little, but also because when it came to preparing my mother for her future, my nani knew of two important things to pass on: cooking and caring for children. My mom had been raised to understand that not only was the kitchen her place, but it was her queendom. This was not to be the case for many frustrating years.

My mother went from her mother’s kitchen, where she learned by watching (and supposedly not asking questions), to her sister-in-law’s kitchen, where she was barred from entry as the youngest (and therefore lowest-ranking) wife in the Misri household, my father’s family. Those were hard years for my mom, and not just in the kitchen. When she and my dad moved from his brother’s home in Delhi to London, England, in the 1970s, she reclaimed her rightful place as the maharanee of her kila. Looking back, I understand why she put up some serious battlements.

In my mind, my mom’s attempts to turn my attention back to my homework had two motivating factors: to focus me on the future she foresaw for me as a financially independent woman who lived in Canada, and to get me to stop badgering her with questions she didn’t know the answers to, or didn’t want to think about.

Angie: What’s that?
Mom: Zeera. (Sprinkles the small, dark, seed-like spice onto the mashed potatoes already in the bowl)
Angie: What’s that?
Mom: I told you – ZEERA.
Angie: (Expert eye-rolling and as much teenage attitude as is wise this close to the wooden spoons) No, what’s the ENGLISH name of it?
Mom: Why does that matter? (Ramping up to exasperated, hands moving faster to try to end this conversation sooner)
Angie: How will I find it in the grocery store if I ask for zeera?
Mom: (Dramatic sigh, scooping spices back into the cupboard like I’ve insulted them) No questions.

This was one of the key arguments my mother and I had when making any kind of Indian food: she saw my demands for the translation of Indian spices into sometimes entirely different English names as a form of colonialism (though she never said that word), while I saw her intransigence as a way to keep secrets from me.

My mom shopped in the northeast end of Calgary for her spices. In those stores, she didn’t need to think about English names for anything; the sealed bags were, in fact, labelled with their Hindi names because they had been imported from India, like zeera (black cumin), ajwain (carom powder), and haldi (turmeric powder). She even bought special rolling pins and bowls from these stores. To my teenage eyes, these implements looked archaic. I sense now that they reminded her of the simplicity of her own mother’s kitchen back in Kashmir. But as the daughter of immigrants, I was determined to take advantage of all the variety that the ‘regular’ grocery stores afforded, so I was constantly trying to drag her toward what I saw as the future.

Angie: Mom, we should buy this!
Mom: What is this?
Angie: It’s called phyllo. I found it in the frozen section.
Mom: Put it back.
Angie: But it looks just like a samosa. Look at this picture. Doesn’t it look like a samosa?
Mom: We don’t need it.
Angie: But the samosa dough takes forever! Look, with this we can just make the potato and pop it into this dough! Can we try it?
Mom: No.
Angie: Why? Maybe I could make samosas too, then? Maybe we could have samosas when people aren’t coming over.
Mom: (Dramatic sigh, throws the package into the shopping cart) Go get some milk.

Suffice it to say that the phyllo experiment did not work. But I’m not convinced it was the frozen pastry’s fault. My mother had a way of passive-aggressively using my curiosity about food to teach me lessons about this Western society I was so madly in love with. In my household, we ate Indian food almost every night, so I desperately craved the Canadian food I saw in TV commercials and my friend’s lunch boxes at school. I went to Girl Guide camp at some point and fell in love with Hamburger Helper, of all things. When I came home, I begged my mom to buy it for us. After a conversation much like the one about phyllo, she relented. She made it for us that night and served it to my sister and me while she and Dad ate their usual vegetable and rice dinner.

Angie: (Poking at the radioactive, orange-coloured stuff in the bowl) This doesn’t look right.
Mom: I followed the instructions on the box.
Angie: There’s no meat in it!
Mom: I don’t cook beef, you know that!
Angie: It’s called Hamburger HELPER. It helps the hamburger. Without the hamburger, it’s …
Mom: You wanted it. You eat it.

At some point my sister escaped this punishment, choosing no dinner over the concoction in front of her (fair, I guess, since I brought it upon us). But I had to eat a whole serving of Hamburger Helper pasta without the hamburger. Just so you know, the spices are in a pre-measured packet meant to be poured into a pound of meat. Without the meat, you are basically eating an extreme amount of salt and msg on a little pasta. I was sick for at least the weekend, and I never asked for Hamburger Helper again. My mother is an exceptional cook of Indian food, even Indian foods she didn’t grow up with. This was not a mistake. It was her way of teaching me that the Canadian culture I valued above her Indian one had its good points, but Hamburger Helper is not one of them.

Angie: (Mashing potatoes with a fork) Can we get an actual potato masher?
Mom: What for?
Angie: (Points at the bowl in front of her) This would go way faster with a masher.
Mom: (Takes the fork and the bowl, mashes the whole thing quickly and expertly, hands it back with triumph mixed in)
Angie: I still think a masher would be better.
Mom: Go do your homework.

The fact that I managed to absorb the way my mother makes pakoras and samosas at all is a minor miracle. If you asked her to write down ‘the recipe’ (and I have done this), so much of the direction would be ‘as much as needed’ or ‘until ready.’ I don’t know why my mother balked so hard against solid recipes with consistent bullet points and instructions. She never (to my knowledge) used them herself. But her non-Indian cooking suffered from her determination to recreate with just her mind and instincts. We, the recipients of these rare Canadian dishes, suffered the most.

My mom always felt that being married so young limited her potential to be financially independent – a problem she was determined to solve for her two daughters, with complete success. I have to think that part of her reticence in involving us in the kitchen work was pushback against what she had been burdened with and denied. Her mother, my nani, had made her into a homemaker. Mom wanted more for her daughters. So she had all the time in the world for us and our traditional education. But she had much less time and patience for passing on the family cooking skills.

Angie: How big do you need to roll those circles? (Squinting into the Facetime video call)
Mom: This big. I’m showing you. (Points to the perfectly symmetrical circles of dough rolled out in front of her)
Angie: Mom, we’re on Facetime, I can’t tell how big they are.
Mom: Here. (Demonstrates the rolling-out procedure again, producing a ninth perfect circle on her counter)
Angie: Like, the size of your hand or the size of a dinner plate?
Mom: I’ll just make them. Tell me how many you need.
Angie: No! I want to learn.
Mom: Then watch! This is how I learned. I didn’t ask questions. I just watched. I learned.

You have a couple of options for cooking them, but, in either case, use a large spoon or a small ladle to measure out the pakora batter:

Note: You can add almost any vegetable to the batter of the pakora (cauliflower, zucchini, potatoes) – just keep the pieces small. 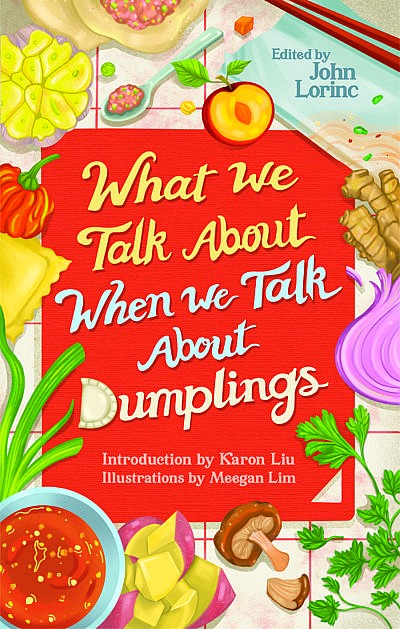