How I Re-Learned To Love Baking After A Nervous Breakdown

Learning to make cream pies and Yorkshire puddings was my personal escape—until the line between hobby and self-worth disappeared. 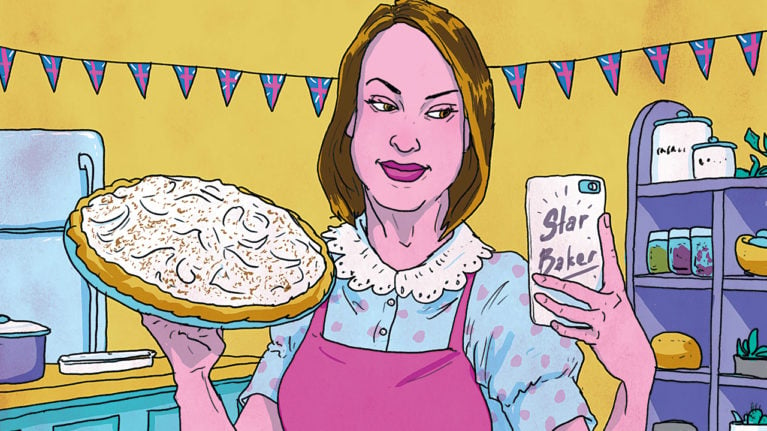 Some of my favourite childhood memories are of afternoons baking with my mom. She’d measure the ingredients, I’d pour them into a steel bowl and then she’d give me a batter-covered spoon to lick while she popped our treat into the oven. Sometimes I’d perform scientific ’spearmints, pouring everything from mustard to molasses into a bowl in the sink, pretending I was making a masterpiece. My mom’s patience was (and is) limitless, even when I dumped her entire spice cabinet on the floor to make “sandcastles.”

I didn’t inherit that patience. While my mom found joy in the time and care involved in feeding her family home-cooked meals and desserts, the attention span of my early adult years had me ordering takeout or eating popcorn for dinner. Cooking seemed especially terrible: hours of prep and cleanup with the chance you could undercook something and make everybody who eats it sick (or dead). Plus, I just couldn’t be bothered. The act of amalgamating ingredients in a way that produced something new and edible was too much work, especially since the margin for error was so small. But baking? Baking had room for mistakes; at first, I only ever baked for myself. Baking, at least, was fun.

Watching The Great British Bake Off for the first time in the fall of 2016 reminded me of this. After a particularly frustrating week, I curled up on my bed one rainy afternoon to stream this show my British pals loved so much. I still had no interest in baking myself, but wanted to watch something that existed out of my comfort zone. And Bake Off delivered: Watching seventh-season contestant Candice Brown assemble a perfect and adorable gingerbread pub reminded me that baking could be an outlet for joy and creativity. By the time I landed on the batter-themed episode, in which contestants made Yorkshire puddings, I was convinced baking was something I could do. Yorkshires only have four ingredients. How hard could they be?

Thanks to beginner’s luck, they were a breeze—and the success reignited my love of making cookies, cakes and anything I found in Bake Off–affiliated cookbooks. I’d found a new world of possibility.

Unlike work, friendships and the pressure of a social media presence that, in some ways, was tied to work (God forbid I tweeted a joke that didn’t garner a million likes), baking offered space to merely try. I could make mistakes, experiment with techniques and share what I made with people I loved. If I didn’t properly chill my pie crust before baking and was left with butter soup? It was fine! When I accidentally doubled the recipe’s amount of butter and started a fire in my oven, it didn’t matter (too much). I’d found happiness in an activity I had zero stakes in, somewhere I could be a person instead of the perfect entity I was desperate to be perceived as.

This beautiful relationship lasted maybe a year. Quickly, my perfectionism began to bleed into my bakes. If I couldn’t Instagram what I’d made, there wasn’t a point—especially if I’d been documenting the process online as I went along. If I announced my intentions to make a cake, posted stories of me following the recipe and then still somehow ended up with something bad, I genuinely believed I’d be judged. By the following autumn, I was treating baking as another metric of what I was capable of, even outside the kitchen. And if something looked messy or tasted too buttery or wasn’t on par with the flawless execution of Bake Off judge Mary Berry? Then I’d not only failed at that moment; I was a failure.

As fall hardened into winter, this desperation to prove myself to myself only got worse. The following January, I tried to make a cake for my parents in hopes of seamlessly capping off a casual Sunday night dinner but frosted it too early, which left it looking like a massive glob of icing and crumbs. Not too long after, I showed up at my parents’ house after a marathon of heartbreak, mishaps and a pet adoption gone awry. I broke into sobs the minute my dad asked how I was doing. I needed my family. I needed my friends. I didn’t want to be alone. I, as far as I was concerned, had failed at adulthood. I couldn’t even bake a cake.

For four months, I didn’t. I quit baking completely. I needed to. The line between hobby and self-worth had disappeared, and
I was hinging my happiness on the outcome of pie crusts and buttercream icing when bigger parts of myself clearly needed attention. Baking was supposed to be fun; it wasn’t supposed to be a warped example of how broken I was.

When the following spring thaw set in (and after I’d begun articulating my fears to my family, best friends and a new therapist), I had a craving for chocolate cream pie. Since I prefer it with lactose-free milk, I knew I’d have to make it myself. I assembled the ingredients, followed the directions and used ready-made pie crust, because I will never learn how to make flawless pastry. The result wasn’t perfect—you try making lumpless stovetop chocolate pudding—but it was perfectly satisfying. I’d made something that hadn’t existed an hour before, and I was proud of it. Proud enough to take a picture of the pie and post it online without stressing about its imperfections.

Most of us start baking with someone we love, or because baking is fun and messy and a space we know we’re allowed to make mistakes in before licking the spoon anyway. These days, when I bake, it’s because I want to. Because Mom and I have a spare afternoon, so we make too many sugar cookies. Or because I want a slice of lactose-free chocolate pie, lumps be damned.