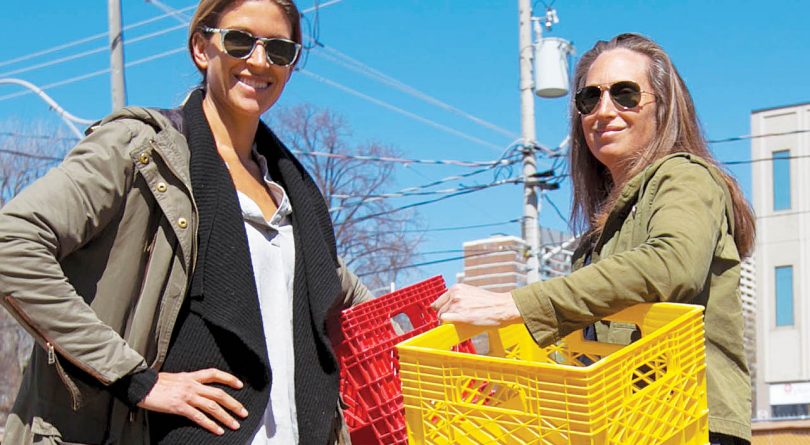 After driving one too many times past the same stubbornly vacant east-end Toronto lot, Deena DelZotto turned to Rachel Kimel and declared, “We should grow food there.”

The friends met while volunteering at The Stop Community Food Centre, where they learned about composting, fertilizing and soil — they knew how to make a garden grow. But developers, they realized, were sitting on these downtown lots, and until the land was claimed for use, it was prime real estate for temporary urban farms.

The pair launched Bowery Project in 2014, using repurposed milk crates to grow an enormous variety of produce, provided to local charities, restaurants and community organizations. Here are some of the places in downtown Toronto that they’ve transformed:

This urban farm was DelZotto and Kimel’s first large-scale project: a sprawling vacant space they filled with 1,500 milk crates, assembled in just 24 hours. The lot is behind a YMCA youth centre. “We grew everything from carrots, tomatoes and beans to chard, kale and arugula,” Kimel says. “We brought the food directly to the YMCA, enough to supplement the daily meals.”

Most of the food grown in these 500 crates went to volunteers at the Alexandra Park Community Centre, while the rest helped programs like SummerLunch+, which provides daily meals to local summer campers. “The kids would come help us water and learn how to harvest,” DelZottlo says. “They were so happy to pick a tomato off the vine and eat it.”

More than 100 volunteers helped Bowery Project fill 1,500 crates with seeds and soil in three hours flat. The food grown on this vacant lot — which just so happens to be the one DelZotto and Kimel drove past for years — is donated to the Native Women’s Resource Centre and sold to local chefs (purslane, a tart, peppery green, is a hot commodity), while weekly workshops on farm maintenance and harvesting involve the community and scavenger hunts entertain the kids.